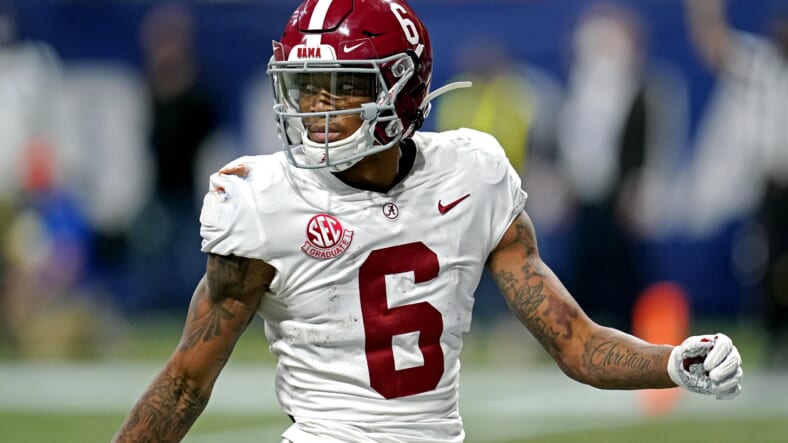 The outlook is unclear for the New York Giants going into the draft after they addressed some of their big needs in free agency, but Pro Football Focus sees the franchise focusing on the offense when the time comes. The Giants have of course already added a premier weapon in wide receiver Kenny Golladay, but a team can never have too many threatening receivers, and there is a chance the Giants will be able to take one of the best players in the college game with the 11th pick.

That player is the current Heisman winner DeVonta Smith, who could fall due to his National Championship injury and LSU star Ja’Marr Chase being the preferred prospect. The two round mock draft sees the Giants managing to land him at an undervalued spot.

DeVonta Smith’s reported weight (170 pounds) shouldn’t keep the Giants from pulling the trigger on the Heisman Trophy winner if he falls into their laps at No. 11 overall. And while the team did just break the bank for former Detroit Lions receiver Kenny Golladay, Smith is an instant upgrade over Darius Slayton or Sterling Shepard â€” one who will benefit from playing a rotational role split between the outside and the slot.

Similar to Miami’s situation with Tua Tagovailoa, New York needs to do everything it can to see if Daniel Jones can be â€œthe guyâ€ for the franchise before making the decision to either move on from him or offer an extension. Adding Smith is a step in that direction.

Taking a look at round two

There’s been a lot less talk and discussion about which player the Giants will take in the second round, but that will be important too. If the mock draft is accurate, the player that the Giants will settle for in round two is Alabama center Landon Dickerson.

This is of course a pick that would have a chance of improving the offensive line right away by giving competition to Nick Gates, who doesn’t look like the long term option at the spot. He came into the league as an undrafted free agent, after all. Gates has overachieved to get in the spot he’s in, but at the end of the day, the Giants would benefit from someone with a higher ceiling.

Joe Judge was notably a former part of the staff at Alabama. It won’t be surprising if the Giants end up taking at least one player from the Crimson Tide in the draft, considering how Judge has already brought over some of the hallmark cultural aspects of college football’s top dynasty.

Even if the Giants don’t take Smith, that player may end up being Dickerson, who recently showed off with cartwheels that he’s over an ACL injury that might have raised questions for scouts.