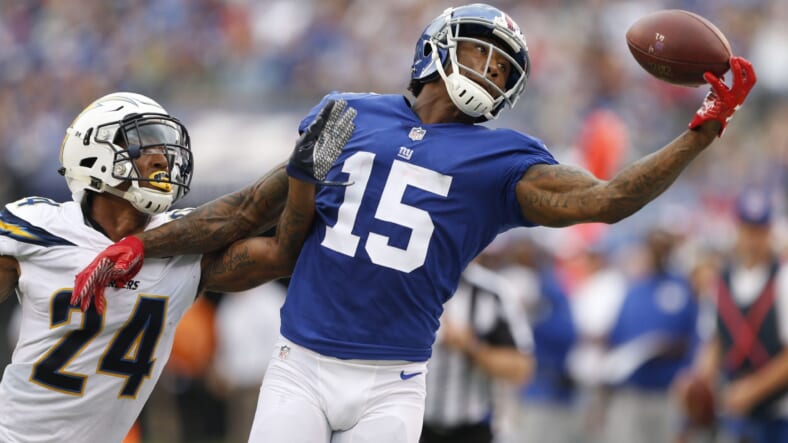 The New York Giants could have done a lot of things differently over the past few years, and a lot of the blame is often placed on the organization – not just the head coaches and the General Managers, but the organization as a whole, including the ownership and lesser known personnel that make up less seen but still important parts of that organization. The organization has been criticized by fans for things like Pat Shurmur’s tenure, but more recently, it would also come under fire from a well known former receiver.

Brandon Marshall played for the Giants during the 2017 season and ended up making a quick exit from the team once the year was over. Largely, he failed to meet expectations and any hopes of the Giants making another playoff appearance after their trip in 2016 were dashed during the year that Marshall played with the team. However, Marshall’s own failures don’t necessarily make his words untrue.

It’s hard to argue, after all, that the Giants were a well run team at the time, when they suffered a sharp decline from their performance just a year prior.

“I did not. I think theyâ€™re great people, I think theyâ€™re a great organization, but I donâ€™t think theyâ€™re disruptive enough,” Marshall said on The Herd on FS1, when asked if he thought the Giants were a well-run organization. “There are a few organizations like the Chicago Bears, the New York Giants, even the Pittsburgh Steelers, where itâ€™s all about history. They donâ€™t want to change certain things, they want a certain guy, and I think that puts them in a box when the game is changing every year.”

Marshall went on to say that, while the Giants have great people, the team’s traditions act as more of a handicap that prevents it from changing. There’s an argument to be made that the Giants, however, have changed things in the past year.

Head coach Joe Judge is a departure from the expected Giants hires, and General Manager Dave Gettleman has vowed to do things differently after retaining his job and to involve more analytics in his strategies – the roster also looks very different than when Marshall was a player for the team. Eli Manning is no longer the quarterback, and the Giants largely rely on younger players such as Daniel Jones and Saquon Barkley.

Will these changes be enough to let the Giants bounce back in the next couple of years, though? That’s something that will be discovered later on, starting with this upcoming season, the first one under a new head coach.