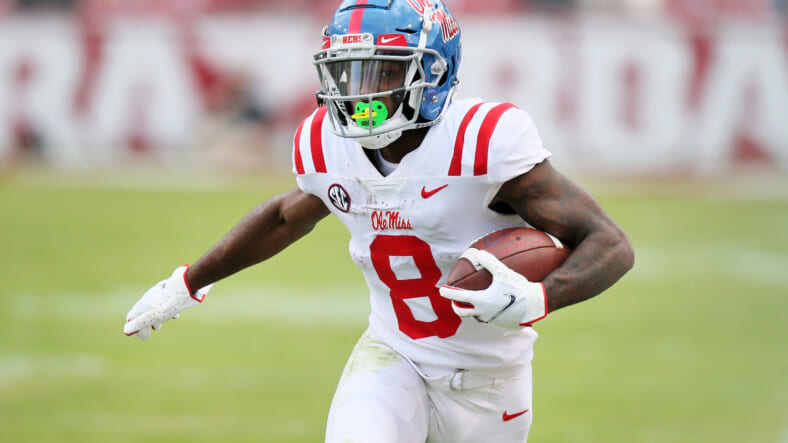 The New York Giants have been linked to players like Jaylen Waddle, Kyle Pitts, and a bevy of other wide receiver options in the 2021 NFL draft. It is expected that the Giants will utilize a premium draft selection to acquire a player at the position, as quarterback Daniel Jones desperately needs help in the passing game.

This past season, Jones threw just 11 touchdowns compared to 24 in 2019, showing a tremendous drop off in production. However, while Jones deserves some of the blame, the wide receivers were unable to create separation and get open downfield. It is also fair to lump Jason Garrett into the equation, considering his route concepts were lackluster didnâ€™t push the field vertically.

The Giants could wait until the second round to acquire a WR, though, and one underrated player isnâ€™t being talked about enough. Mississippi receiver Elijah Moore is just as talented as any option in the first round, and heâ€™s a player they could slip as a 5-foot-9 and 185-pound receiver. Thanks to a fantastic Lane Kiffin offense at Ole Miss in 2020, Moore saw his statistics skyrocket.

In 2019, Moore posted 850 yards and six touchdowns but logged 1193 yards and eight touchdowns this past season as Mississippiâ€™s primary offensive weapon. As a former four-star prospect, Moore has always been a highly-touted receiver, and he finally hit his stride this past year. His professional comparison is Steve Smith, formerly of the Carolina Panthers.

Omg the clipboard toss. Also, another day at the office for Elijah Moore: 11-186-1, stuffing box scores all season. pic.twitter.com/4JZS8Hx8Wj

How would Moore help the New York Giants?

While Moore is primarily a slot receiver, he has the athleticism and speed to create separation and make incredible plays after the catch. His ability to stop and start is unparalleled, and with a healthy blend of great route running and explosive athleticism, heâ€™s a player that has an incredible ceiling.

The Giants could desperately use a dynamic receiver, and there are other receivers who offer similar traits, including Waddle, Rondale Moore, and Kadarius Toney.

Elijah is a player who could slip to the second round right into the Giantsâ€™ lap with the 43rd overall pick, so even if they do end up taking a defensive player like Micah Parsons or Patrick Surtain, they can find fantastic value at the WR position later on. If they are looking for playmaking talent that can create separation and make plays in the open field, Elijah Moore might be their guy.