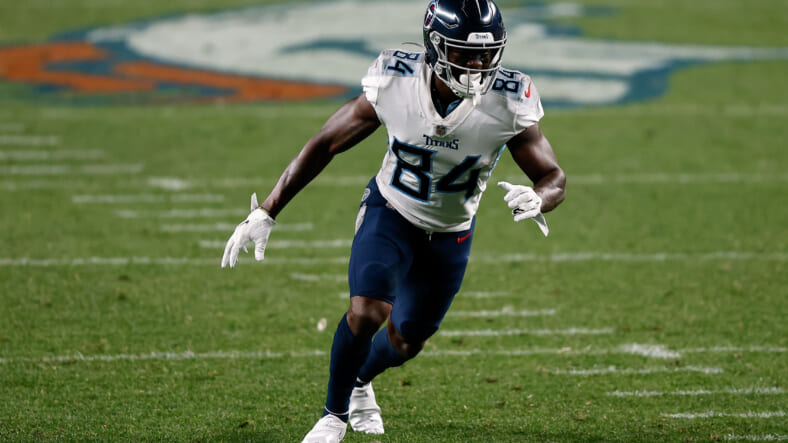 The New York Giants are preparing for an interesting off-season that will ultimately force them to make some difficult decisions. While the expectation is that they will retain Leonard Williams on a multi-year deal, Dalvin Tomlinson might not experience the same. Management is going to have to cut bait with some players as they fight the salary cap and the expectation that it will lower a minimum of $15 million.

With that being the case, the Giants are also going to work their way around bolstering the offense, which is something that owner John Mara guaranteed during his post-season press conference. There are a variety of players available in free agency, but not all of them will be cost-efficient. Players like Kenny Golladay and Allen Robinson will likely be franchise tagged, forcing the Giants to trade to acquire them or taking them out of the equation.

The Giants might have to dive into the mid-tier market for their solution, whether it be panther Curtis Samuel or Tennessee Titans number two receiver Corey Davis.

Samuel is an intriguing prospect for the Giants, as he offers elusiveness as a gadget player and also slot machine. He can also play on the outside, allowing him a bit more versatility. However, he doesnâ€™t fit Jason Garrett’s scheme very well, which leads us to Davis, who is a bit bigger at 6’3″ and 209 pounds. Davis might fit Garrett’s scheme perfectly as a bigger possession receiver who wonâ€™t earn top-tier money this off-season.

Letâ€™s take a look at how the Giants can overhaul their offense this off-season, giving Daniel Jones the weapons he requires to finally take a step forward and 2021.

Given Davis’s size advantage, I believe he will fit the offensive scheme perfectly. This past season, he finished with 984 yards and five touchdowns. He was extremely close to breaking the thousand-yard mark for the first time in his career, and while he has underwhelmed for the most part as the fifth overall pick in 2017, he has plenty of untapped potential and would easily become the Giants’ number one receiver the second he signed his contract.

When looking at where he was targeted on the field in 2020, he caught a majority of his passes in the shallow range between the line of scrimmage and 10 yards. The majority of his yards came in the intermediate range, which is perfect for Garrett, who doesnâ€™t utilize a vertical scheme. Heâ€™s best utilized when targeted in the middle of the field and the right side, which matches up perfectly with Daniel Jones and his strengths.

Kyle Pitts has been all the craze lately, based on his elite attributes as a prospect. Pitts is no ordinary tight end, he can play on the outside as an â€œXâ€ receiver and in the slot, making him one of the more modernized players at his position. Heâ€™s an elite receiving threat, and while he does need some refinement in the blocking department, TE Coach Freddie Kitchens is the perfect man for the job.

Pitts would not only offer Jones a fantastic security blanket, but he would fit Garrettâ€™s scheme well as a vertical option on spray fade routes. Pairing him up with Evan Engram in 12 personnel would be deadly, and I would argue that there is no defense that could stop both of them when on the field at the same time. Add in Corey Davis, Sterling Shepard, Saquon Barkley, and Darius Slayton, and the Giants are in damn good position.

While some mock drafts have Moore being selected in the first round, there is a chance he drops to the Giants with a 43rd overall pick. Ultimately, he has only played seven games over the last two years, which is a major concern for teams scouting him as a potential first-round option. However, when he is healthy and available, he was one of the best playmakers in college football, and that skill oftentimes translates to the NFL. I would be surprised if he fell to the Giants, but for the sake of the scenario, selecting him here would truly give the Giants one of the best off-seasonâ€™s out of any team when focusing on offense.

To put into perspective how explosive Moore is, he collected 1258 yards and 14 total touchdowns in 2018, but as stated above, he hasnâ€™t played much since then. He is a risk worth taking every time.