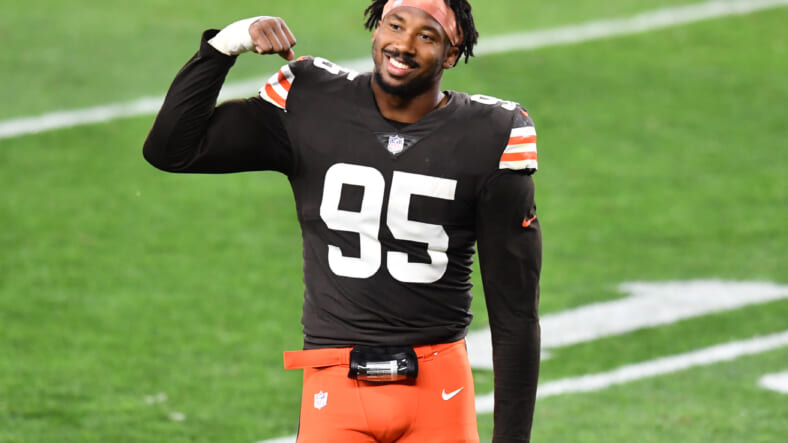 The Cleveland Browns’ defensive line has racked up 34 sacks this season. 10.5 of those sacks have come from elite pass-rusher Myles Garrett alone. Andrew Thomas and the Giants’ offensive line will have their hands full as they try to bounce back from a horrible Week 14 performance.

In Week 15, the Giants will defend against a Browns’ defensive line that has been consistently getting after the quarterback this season. Myles Garrett, in particular, has been an absolute game-wrecking in 2020.

Myles Garrett was the first overall pick in the 2017 NFL Draft. Since then, he has been one of the best pass-rushers in the NFL on a year-by-year basis. He had a career-year in 2018, totaling a career-high 13.5 sacks that season. In 2019, though, Garrett was primed to surpass that sack total before being given a lengthy suspension that ended his season. In 10 games last year Garrett racked up 10 sacks.

2020 has seen Garrett put together another elite season. He has 10.5 sacks on the year through 13 games and a career-high 4 forced fumbles. Myles has been a nightmare for opposing offense this season. He leads the NFL in forced turnovers pressures (7 total) and has the second-highest pass-rushing grade in the NFL according to Pro Football Focus.

Myles’s 10.5 sacks are tied for the third-most in the NFL this season. He has been applying a tremendous amount of pressure to quarterbacks, totaling 41 pressures this season (eighth-most) with a 12.4% pressure rate (ninth-best).

Myles Garrett has been a dominant force on the Browns’ defense this season. But he is not the only talented pass-rusher on Cleveland’s underrated defense. Former Giants’ pass-rusher Olivier Vernon is having an excellent season as a member of the Browns this year and is coming off of a 2-sack performance in Week 14. Vernon has 7 sacks on the season and will help Garrett apply pressure to Colt McCoy this Sunday night.