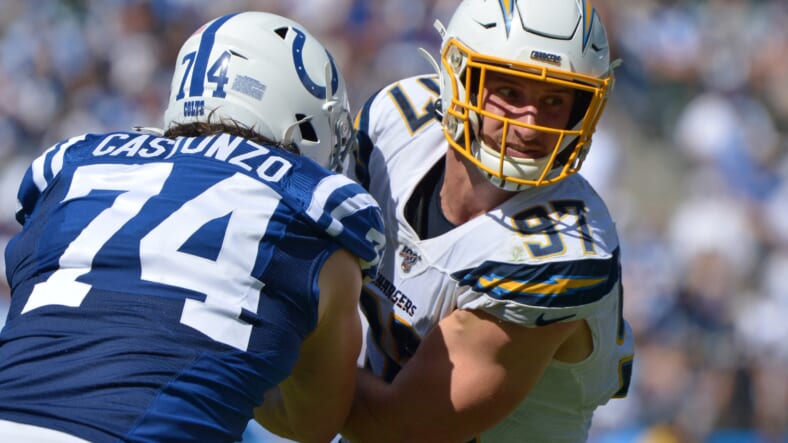 The New York Giants signed former left tackle for the New England Patriots, Nate Solder, to a record-breaking deal in 2018 to sure up Eli Manning’s blind-side. While Solder adapted half-way through the season, he struggled to maintain consistency. During rookie quarterback Daniel Jones’ inaugural campaign, Solder has been abysmal.

Solder currently sits with a 67.6 grade, per PFF. He has allowed eight total sacks, which is the second-highest number in the NFL. Considering his mammoth contract, the Giants aren’t getting the value they expected out of the Super Bowl-winning tackle.

That reality could force them to look elsewhere in free agency if they elect not to draft a player like Andrew Thomas in the upcoming NFL Draft. One stellar option in free agency, given the Indianapolis Colts, don’t re-sign him, is Anthony Castonzo.

Castonzo has played with the Colts for five seasons, and they will undoubtedly be looking to bring him back, considering the difficulty of finding a top-notch tackle in the NFL. On the off-chance they let him walk, the New York Giants should be buyers, as he’s earned an 82.1 grade on the year and has allowed just three sacks over 700 snaps. Solder has allowed eight in 624 snaps.

Anthony Castonzo has been dominant, again, despite having to change for a new QB (which affects pass pro for OTs).
He's 32 and a free agent. If the #Colts don't re-sign him, the #Giants should make him the highest-paid OT in the NFL. OT like him hasn't hit FA since Whitworth.

What would the Giants do with Solder?

If Big Blue secured the services of Castonzo, they would likely move Solder over to right tackle, which would give him more of an advantage given it’s Jones’ vision-side. Alternatively, the Giants do have an out in his contract after two-years. Essentially it’s a two-year deal worth $35 million with $13 million in dead cap. If the Giants let him go, they would save only $6.5 million in cap space, which is minimal. They’re better off moving him to the right side and plugging Castonzo in at left tackle.

This would give the Giants a much better offensive front: Anthony Castonzo, Will Hernandez, Jon Halapio (?), Kevin Zeitler, Nate Solder.

Ed Valentine – The Giants need to be better, but how can they do that now?

George Willis – Golden Tate is sick of all this Giants losing