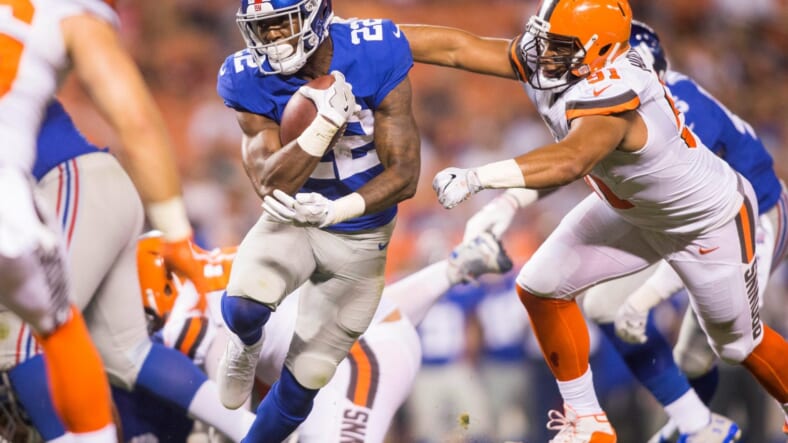 The New York Giants are still organizing their roster heading into the third week of the preseason. Their running back position is locked in with Saquon Barkley as the starter. Barkley lead the league in scrimmage yards last year with 2,028 yards en route to winning AP Offensive Rookie of the Year.

Behind Saquon Barkley, things are not as set in stone. There was a three-way competition for the second-string running back position, but this competition has now grown to a four-way.

Initially, the job battle was between Wayne Gallman, Paul Perkins, and Rod Smith. All three have flashed their potential but also shown great weaknesses. Now, a new back has been added to the mix. Jonathan Hilliman competed hard in the Giantsâ€™ second preseason game and could make a push to remain on the roster this season.

Jonathan Hilliman was a locally signed undrafted free agent who finished his collegiate career at Rutgers. Hillimanâ€™s first three years were spent at Boston College. Jonathan totaled 1715 rushing yards through his four-year career with an average of 3.5 yards per carry and 19 rushing touchdowns.

These are not overly impressive stats from Jonathan Hilliman, but he flashed enough potential for the Giants to sign him after the draft. And now, after an impressive first preseason game, Hilliman has flashed enough to propel himself into the conversation to make the final roster.

Hilliman received a team-high 16 carries on Friday night versus the Bears. Hilliman continued his average 3.5 yards per carry as he went on to total 56 rushing yards and 1 rushing touchdown. Jonathan lead the Giants in rushing yards and flashed his elusiveness a couple of times.

Jonathan Hilliman’s touchdown rush was a perfect example of what Hilliman does best. He is a shifty runner who can jump cut and slither his way through the holes to get into the end zone.

Hilliman played an impressive game, especially for his NFL debut. But this does not lock him in on the roster. He lead the team in rushing yards and carries, but his average yards per carry was only third of the runners. Paul Perkins averaged 5.8 yards per carry and Rod Smith averaged 4.2 yards per carry.

So it was a fantastic debut for the New Jersey native Hilliman, but he has a long ways to go and tough competition to win if he wants to be on the Giants’ roster in September.