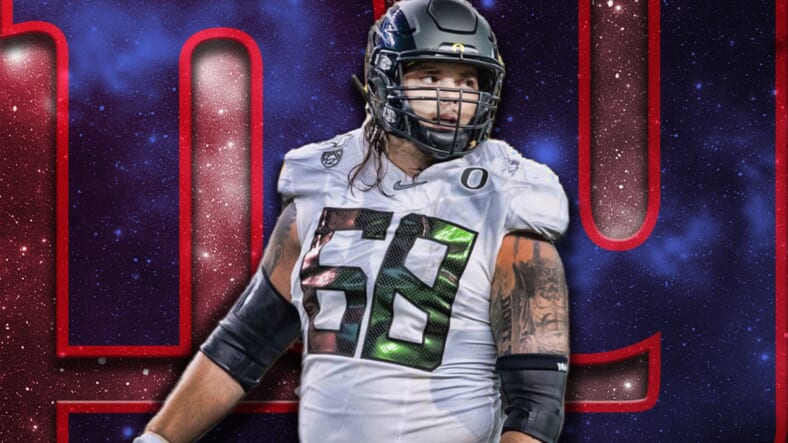 The New York Giants spent four picks in the 2020 NFL Draft on the offensive line. New York secured two tackles, one fourth-overall, and one ninety-ninth-overall. They then found some depth at guard with Shane Lemieux out of Oregon in round five.

Shane Lemieux was a bit of a surprising pick. The tackle position was weak for the Giants but they went into the draft already pretty strong at the guard position. Kevin Zeitler and Will Hernandez are capable starters. But Shane Lemieux might be able to fill a different role.

This morning, beat writers were given the opportunity to interview Shane Lemieux via a conference call. He was asked about his potential role with the Giants in the near future and whether or not he can play the center position.

â€œI think Iâ€™m an offensive lineman,â€™â€™ Lemieux said when asked what position he plays (via the NY Post).

Shane Lemieux discussed his versatility, stating “versatility is the biggest factor in this game. Coaches want to be able to put you into multiple spots.â€™â€™ This is certainly true with the Giants as we have seen with the likes of Nick Gates. Gates has filled in at guard, tackle, and is now practicing to play center for the Giants in 2020.

The Giants will likely try Lemieux at center and see how it goes. Here is what Shane had to say when asked about potentially moving over to the center position:

â€œI feel like with center thereâ€™s a lot more responsibility on you to know the offense and to know more of the defense and to just be more sound with whatâ€™s going on around you,â€™â€™ Lemieux said. â€œAnd obviously youâ€™ve got to snap the ball.â€™â€™ – Shane Lemieux via the NY Post

Below is a video of Shane Lemieux pre-draft practicing snapping as a center:

The Giants will have depth at the guard position in 2020. Lemieux is a talented interior offensive lineman who understands the importance of versatility and durability. He missed only one snap in his four-years as a starter at Oregon. The Giants will see how he performs at center but, regardless, Shane Lemieux will be available to fill in at whatever interior offensive line position they need him to.