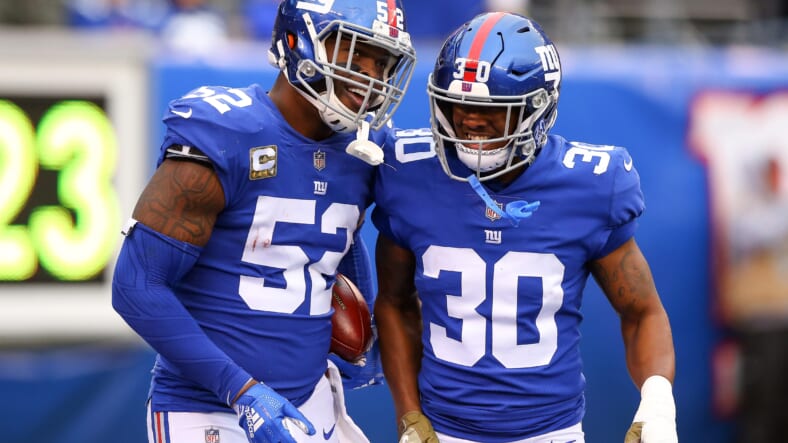 Recording 93 combined tackles and five interceptions in 2018 certainly makes New York Giants linebacker Alec Ogletree look like an elite defender. Previous to last season, Ogletree was never known as a ball-hawk but managed to secure two touchdowns on INT returns, proving his worth after a speculative trade.

General manager Dave Gettleman brought Alec in to help bolster the middle of the defense, putting a true leader and aggressor in the MIC position. Last season was the first of his four-year career that he didn’t record 10 passes defended or more, but he compensated with the turnovers he forced.

Ultimately, Ogletree had a ‘decent’ year in his first with Big Blue. The Giants, however, need him to take his game to the next level in 2019 to justify his $11.75 million cap hit.

Other than his efficiency in coverage, the Giants’ defense as a whole ranked 24th in the league allowing 371.4 yards per game. While this can’t be attributed to Ogletree alone, it shows the ineffectiveness of the unit as a whole and what the Giants need to do to compensate. It starts with the linebackers and ensuring they have the talent necessary to not only call defensive plays but make them as well.

The bottom line, Ogletree needs to improve in 2019 despite his INT totals. According to Pro Football Focus, Alec OgletreeÂ still ended up with the eighth-worst coverage grade of any starter in the league.

Here’s an example of his inability in coverage:

Ogletree struggled mightily with running backs in the flat, something defensive coordinator James Bettcher will look to solve this season. Expect to see a lot more of Tae Davis in coverage rather than Ogletree, who will likely feature closer to the line of scrimmage and rush the passer more frequently.

In addition to Alec’s inadequacy in the clip above, his tackling can be a problem at times. He missed 20 tackles in 2017 and a similar number in 2018. He must increase his efficiency in that category if he wished to reach his potential.