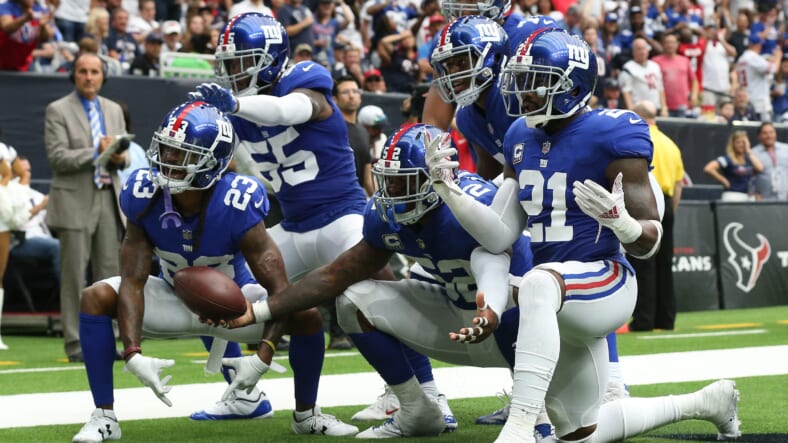 The New York Giants should not be playing on Monday Night Football. At the start of the season, Giants vs Falcons looked like it would be a good matchup, but that’s not really the case right now. Both teams have a similar record, the Giants at 1-5 and the Falcons with two wins. But the game was set before things went south for both teams, and now, the Giants risk embarrassment on national TV yet again.

Neither team is where they want to be with the talent that they have right now. But at the same time, the Falcons are in a better position than the Giants are, even if they’re only separated by one win. Unlike the Giants, the Falcons can actually score. New York is the 28th best offense in the NFL according to total points scored. Atlanta, on the other hand? They’re in the top ten, at number eight.

Even in their earlier losses to the Saints and the Bengals, they put up 37 and 36 points respectively. When they picked up their first win last week, they scored 34. Both teams came into the season with the raw potential to be offensive juggernauts, but so far, the Falcons have capitalized on their talent and the Giants haven’t. They’ve better used their selection of weapons, and you just have to take one look at their win over Tampa to see it.

They have not one but two weapons in the backfield, with rookie running back Ito Smith scoring the second touchdown against the Buccaneers despite Tevin Coleman having a larger share of the team’s overall rushing yards. Smith scored on a 14 yard run off the left guard, which would seem like a miracle for the Giants with the current level of blocking.Â  On their next drive, tight end Austin Hooper was able to get wide open near the end zone for a 9 yard passing touchdown. Before either of those plays happened, Atlanta had taken the initial lead with a 32 yard pass to Mohamed Sanu.

You could make an argument that the Falcons are like the Giants if their offense actually panned out. Julio Jones has a similar talent level to Odell Beckham Jr., and on paper, the Giants running game shouldn’t have been that much worse than the Falcons entering the season. But not many predicted Austin Hooper being more productive than Evan Engram, both because of on the field struggles and injury, and Jonathan Stewart turning out to be a bust of a signing was also a surprise.

If the New York Giants are going to show up on defense, this is the game where they need to do it. The offense that they face is the most well-rounded one they’ve seen this season, except for the New Orleans Saints. And in that game, the defense allowed 33 points. Those mistakes can’t be repeated against the Falcons if the game is going to be winnable for the Giants. There’s just too many weapons on the other side for them to have a poor game.

This could be a turning point for the Giants, a game where the defense shows up and proves itself against one of the better offenses in the league. A game that shows that, even if the offense isn’t so great, things are going okay on at least one side of the ball. Or it could be a national embarrassment, again. We won’t know which one it is until tonight.