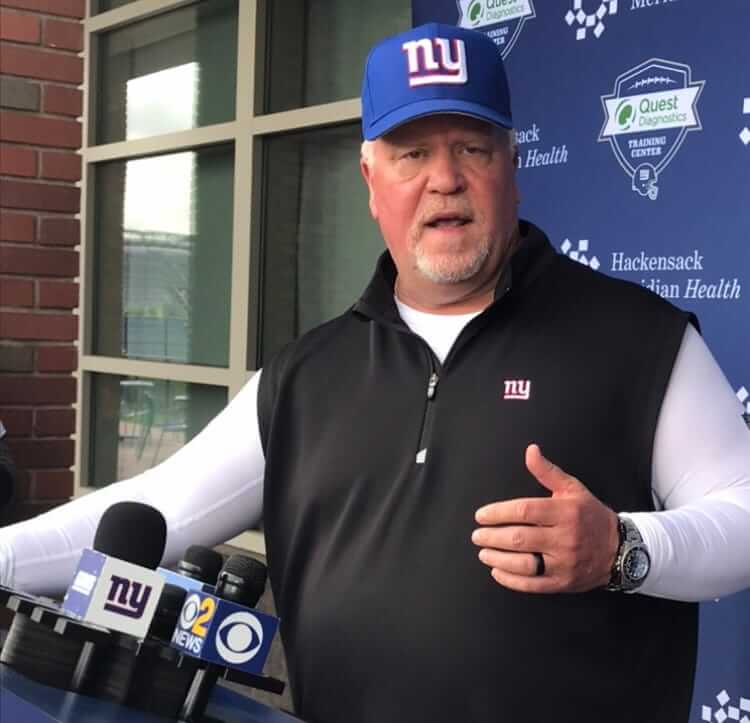 The New York Giants kicked off their 2022 minicamp today. It was a productive day of practice that saw new players and new coaches unite as they begin to lay the groundwork for the new schemes. Mandatory minicamp is the last step in the offseason program before they break until training camp. It is an important time for the new coaching staff to implement schemes and take a sneak peek at the roster’s talents.

The talk of the day was new defensive coordinator Wink Martindale and his players dominating practice. The defense “simply looks better than the offense right now” and was the much better group during 11-on-11 drills today. Martindale’s blitz-heavy scheme was in full throttle, constantly pressuring quarterback Daniel Jones and keeping the offense in check all afternoon.

Martindale is throwing different looks at the offense just about every play, blitzing safeties, having edge rushers drop into coverage, going with extra defensive backs … it’s a lot for a new-look offense to handle. – Zack Rosenblatt on Wink Martindale’s defense during the first day of minicamp via NJ.com

Rookie safety Dane Belton was used in some defensive back blitzes today, providing pressure to the quarterback. Martindale was creative and kept the Giants’ offense guessing.

“Wink came out with some Wink stuff today.” – Jon Feliciano via Art Stapleton

One thing to keep an eye on with Brian Daboll’s new offensive scheme is the running backs being utilized in the receiving game. Three different running backs caught a touchdown pass today. Saquon Barkley caught one from Daniel Jones, Matt Breida from Tyrod Taylor, and Antonio Williams from Davis Webb. Saquon Barkley’s involvement in the passing game was “noticeable,” per Jordan Raanan.  Daniel Jones went 13 of 21 passing and was under constant pressure today while Tyrod Taylor demonstrated himself as a major upgrade at backup quarterback (Zack Rosenblatt).

Daniel Jones cleared for contact and other injury updates

New head coach Brian Daboll confirmed today that quarterback Daniel Jones has been cleared for contact. Jones suffered a season-ending neck injury in 2021 but has made a full recovery and is ready to return to the field in maximum capacity.

Giants and Jets planning to hold a joint practice

After practice today, head coach Brian Daboll revealed plans for an upcoming joint practice. Daboll says the Giants and Jets are planning to get together and practice together sometime this summer.

“Yeah, plan is right now we’re going to do it,” Daboll said. “I think it’s good to practice with the guys from down the street, play in a different conference. I know Coach [Robert] Saleh. He’s a really good coach. We’ve had some good talks. I think it’s a good chance to come out here and be competitive against some other players that you’re not practicing against throughout the summer as long as you do it the right way. We want to treat those guys that they’re just like our teammates when you’re practicing. So, I think that Coach and I have had some good conversations and looking forward to it.” – Brian Daboll via Giants.com