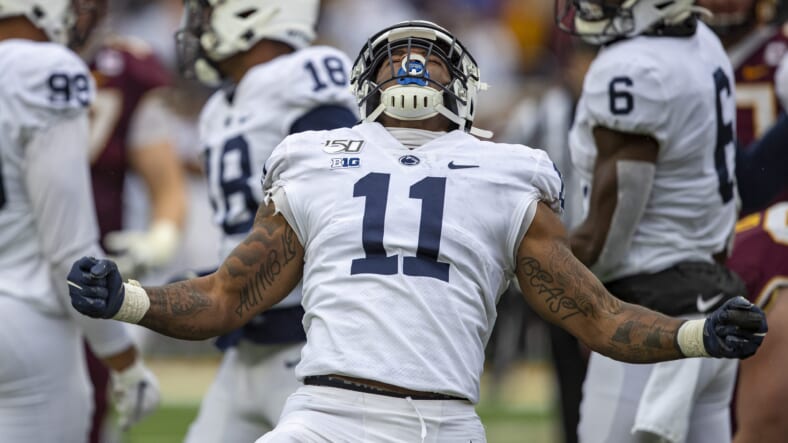 Headed into the final stretch before the draft, one of the top defensive prospects linked to the New York Giants is Micah Parsons. The Giants don’t take linebackers in the first round very often, but they have a tendency to make good picks when they do take a leap of faith on one. A lot of people think Parsons deserves to be the player that breaks their streak of not spending their first pick on this position. And some analysts think this is an actual possibility.

One of the ones mocking Parsons to the Giants is Peter King, who released his final mock draft and made the bold prediction that the Giants will take Parsons over DeVonta Smith, Rashawn Slater, or any other player on offense.

Last Giantsâ€™ first-round linebacker: Carl Banks, 1983. Okay, so once every 38 years a linebacker comes out whoâ€™s worth it. The Giants always do a good job disguising their intentions, and this year theyâ€™ve been particularly good. Three things Iâ€™ve heard: Joe Judge loves DeVonta Smith; the organization likes cornerback Jaycee Horn a lot; and Dave Gettleman loves Parsons. If you can get past some of the immature pockmarks on his rÃ©sumÃ©, there is so much to love. Easily the best linebacker in the draft, with the ability to be a top edge player and double as a sideline-to-sideline presence. Now, heâ€™s only a one-year starter, didnâ€™t play football last year, and the Giants will have to be comfortable with the fact heâ€™s had maturity issues. Smith or Horn could easily be the pick hereâ€”Parsons is my best guessâ€”but 4.36-in-the-40 linebackers are quite rare.

The pros and cons of taking Parsons

There’s both good sides and bad sides to this potential pick. The good side is that Parsons is one of the best physical prospects available and, while he’s not the most experienced college player, was definitely a standout at that level for the time that he did play.

The Giants would be able to find a spot for him to make an impact immediately. And in terms of defensive prospects, Parsons is probably the best player available when the Giants pick – if he is still on the board by then.

The main problem that will be brought up is character concerns. Parsons has been involved in controversy, including an unclear situation at Penn State where one transfer accused several former teammates of hazing. That list of players included Parsons, but it also included Panthers defensive end Yetur Gross-Matos and the Carolina organization hasn’t apparently had a problem with him.

Worries about character concerns come out a lot for players entering the draft, and many great players in the past have been targeted by doubts about their character before being drafted. Many times, unless there’s something a bit more substantial, it’s best to not worry too much about it. This might just be one of those times.

Parsons, after all, passes the eye test in this area. He’s not a Johnny Manziel or a John Rosen – a player whose behavior in public or with the press foreshadows clashes with teammates. He’s not even an Eli Apple, whose mom’s social media antics could have been foreseen from a mile away.

So if the Giants do take Parsons? Don’t worry too much about the ‘character concerns’ reports. They’re pretty vague so far and seem to paint a similar picture to the usual rumors that come out every year at about this time – rumors that aren’t always accurate, or supported by those who have more experience with the player up close.