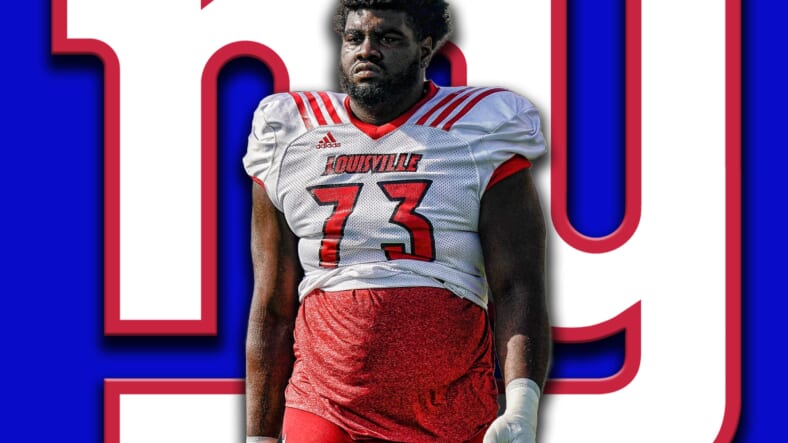 Could the New York Giants land Mekhi Becton later in the first round after flagged drug test?

Something you never want to hear is NFL draft prospects having flagged drug tests. Multiple players from the upcoming draft underwent that reality, according to NFL Networkâ€™s Ian Rapoport. One noticeable name was Louisville offensive tackle, Mekhi Becton.

The NFLâ€™s new collective bargaining agreement states that flagged players like Becton will be moved to Stage 1 of the NFLâ€™s intervention program. This will last for 60 days, and if he is not flagged again in that time, he will return to normal status, which essentially clears his plate of any potential issues.

The Giants, who are in dire need of offensive line support, could see this as a positive thing, based on the history suggesting draft-stock declines after suspected drug/PED usage.

Becton is one of the most intriguing prospects in the upcoming draft, considering his unbelievable size and agility at 364-pounds. Some talent evaluators believe he can be a cornerstone left tackle and has the highest ceiling of any of the prospects available.

He is competing with Jedrick Wills, Tristan Wirfs, and Andrew Thomas as the best tackle available. The Giants, being a team in need of protecting their investments in Daniel Jones and Saquon Barkley with a fresh tackle, could benefit from a potential Becton slide. If they elect to trade back and he is still there, general manager Dave Gettleman could pull the trigger.

However, I do believe cattleman is still enamored by Wirfs the most and is more likely to select him if he passes on Clemson stand out defender, Isaiah Simmons.

While I don’t believe a scenario like this could occur, Becton may slide to the end of the first round, where Big Blue could theoretically land Simmons and trade up to grab Becton. This would require him to be available in the late 20s, which is highly unlikely based on recent grades from evaluators like Daniel Jeremiah, who believes he’s the best choice possible.