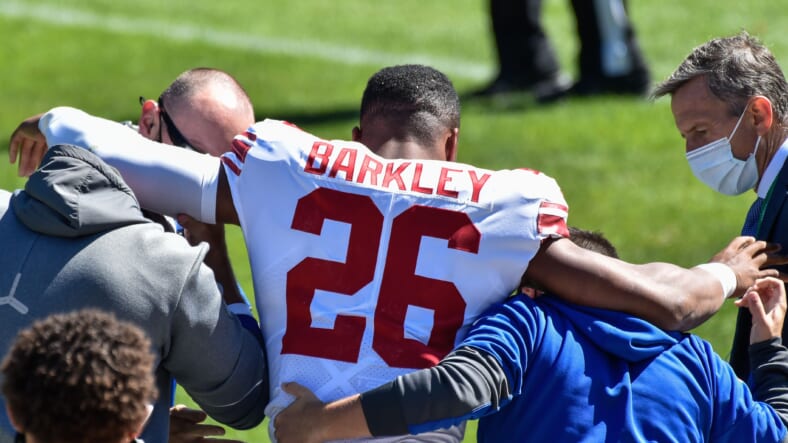 The return of Saquon Barkley is one of the most anticipated dates for the New York Giants this year. The team was forced to play most of last season without their top offensive weapon, and it showed in their performance. The running game struggled despite Wayne Gallman having his best season, and it looks like Barkley returning is a prerequisite for the Giants offense getting up to full speed.

However, there’s no definite timetable for that yet. It looks like Barkley is most likely to come back in week one, but the team is being careful with his recovery and head coach Joe Judge can’t confirm anything.

Judge spoke with Carton & Roberts on WFAN and, while he was impressed with Barkley’s progress, also said that things would be left in the hands of the medical staff.

No return date yet for Saquon Barkley

“Iâ€™m not a doctor. Iâ€™ll trust our training staff and the medical professionals to tell us when heâ€™s ready to go. I just know he comes to work and does everything heâ€™s asked to do. Heâ€™s getting better day by day,” Judge said. “Now, when they say heâ€™s ready to go? Thatâ€™s when weâ€™ll put him on the field. But I want to make sure heâ€™s ready to go, 100 percent, before we throw him out there.”

He also said that he can’t give a hard timetable because the staff itself doesn’t have one yet.

A lot is resting on Barkley coming back fully healthy, especially as last season’s top rusher Wayne Gallman is now in San Francisco after the Giants didn’t give him a second contract.

Devontae Booker was signed to fill Gallman’s role, but new running backs outside of Barkley have always been a shot in the dark for the Giants in the past few years. There’s no guarantee Booker is a backup of the same quality.

Barkley had a great rookie season but has dealt with injuries in two out of three years overall. This has largely kept him from reaching his full potential, and with a mega-deal potentially looming on the horizon after his rookie contract, getting it in gear this season and putting on a good performance will be important for Barkley’s career.

Despite there not being a recovery timetable, it doesn’t look like there’s much reason to worry. His recovery has been going well according to all reports, and not much has come out to indicate Barkley won’t be ready for week 1.