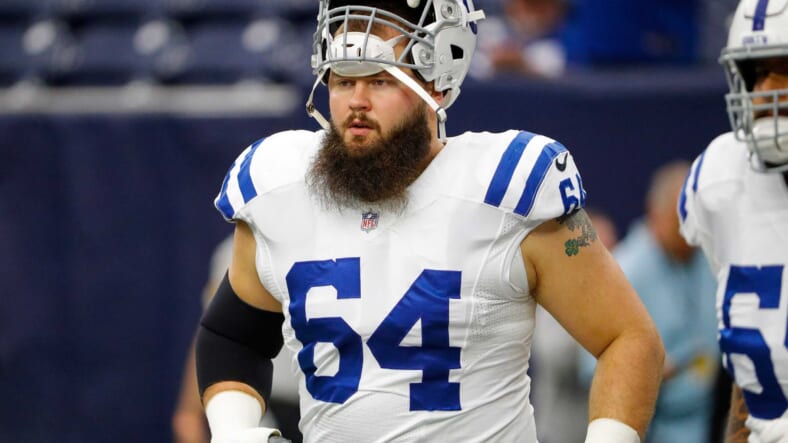 The New York Giants made a serious attempt to rebuild their offensive line this offseason once and for all. New general manager Joe Schoen was careful with the Giants’ cap space this offseason and did not make any big splash signings in free agency. However, he did make a crucial signing on the offensive line that will serve as a massive upgrade up front. The signing of Mark Glowinski will end the Giants’ revolving door at right guard.

The New York Giants signed right guard Mark Glowinski this offseason to a three-year, $18.3M contract. Pro Football Focus recently described this deal as the Giants’ best contract. At just over $6M annually, the Giants are paying a low price for a high-quality starter at right guard.

The right guard position has been an issue for the Giants over the past few years. Will Hernandez started and struggled in that spot in 2021. Kevin Zeitler started there for the previous two seasons, stepping in after a 2018 season that featured more than one starter at right guard. Now that Glowinski is signed for the next three years, the Giants have stability again at the position.

Acquiring a reliable starter at right guard was important for the Giants this offseason. New York will be playing with a young offensive line this season. Rookie right tackle Evan Neal will start from day one. Rookie offensive tackles often feature growing pains, so having a veteran alongside Neal is crucial.

Mark Glowinski spent the last four seasons playing with the Indianapolis Colts. He was the right guard on one of the best offensive line units in the NFL. He is a major upgrade for the Giants. Glowinski allowed two sacks and 38 total pressures last season but finished the final eight games without giving up a sack and just one quarterback hit. He has also been an above-average run-blocker throughout his career.

During Glowinski’s four years with the Indianapolis Colts, he earned grades above 60.0 in each season, with 64.0-plus run-blocking grades to boot. He provides a solid veteran presence on a young offensive line, much like he did with the Colts’ young and talented group over the past few seasons. – PFF on Mark Glowinski