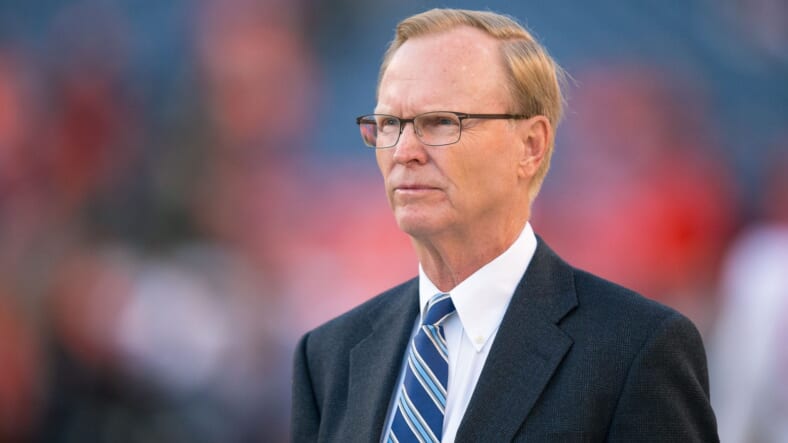 Almost everyone is ready for the Odell Beckham Jr. debates to be over, but they just keep going. This time, the one hitting out at the star wide receiver is one of the owners of the New York Giants, John Mara. His comments are, of course, seemingly referencing the interview that Beckham did with ESPN, which has generated considerably more controversy than Beckham ever intended when he originally gave the interview.

“I think he needs to do a little more playing and a little less talking,” Mara recently said. He also stated that he wished Beckham could make headlines on the field rather than off it, but claims that he hasn’t talked to Beckham about the matter and that “enough people” have already talked about it.

Giants owner John Mara just now at owners meetings, re: Odell Beckham: "I wish he would create the headlines by his play on the field as opposed to what he says and what he does off the field. I think he needs to do a little more playing and a little less talking."

The entire situation is bizarre. The interview is already old news by now, and the drama from it had already cooled down. Over a week ago, head coach Pat Shurmur said that the situation was over. “I publicly declared that I didn’t agree with his comments and I asked anybody that was interested if they wanted clarification [to] go to Odell because he’s a big man… Let’s talk football, not drama.”

But talking drama instead of football is exactly what an owner of the team is doing, and it’s especially strange that Mara is more willing to talk about the matter with the media than he is with Beckham himself. There’s already plenty of things for the Giants to worry about, and a lot of narratives spreading about the team. Almost none of them are good narratives.

So why is John Mara adding to it by publicly criticizing Beckham over something that’s, for all intents and purposes, old news? Well, the world will likely never know.

Still, no matter where you stand on what Beckham said, there’s more recent and better subjects to criticize. And more Beckham drama is the last thing the team needs during their preparations for a Monday Night Football game against the Atlanta Falcons.