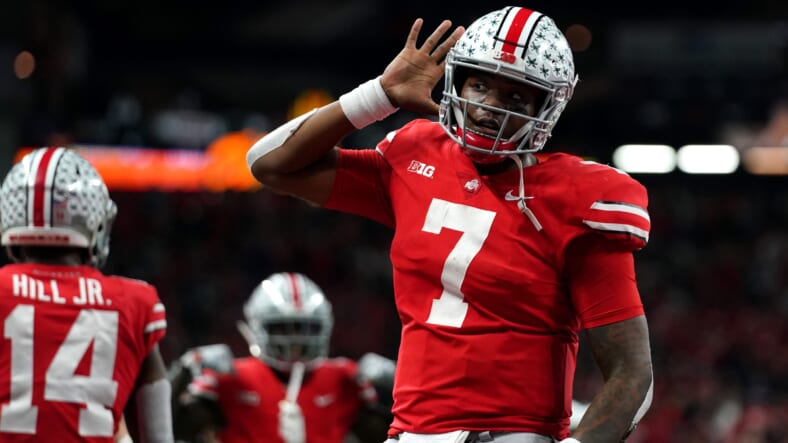 The New York Giants are reportedly searching for their successor to Eli Manning. There are a few quarterbacks expected to go in the first round of the 2019 NFL Draft. The top quarterback prospect is Dwayne Haskins Jr. from Ohio State University.

Many believe the Giants will be targeting him in the draft to succeed Eli Manning. However, the Giants are picking 6th, and there is a chance other quarterback-needy teams might trade ahead of the Giants to take Haskins. But if the Giants want to prevent that from happening, they could make a trade of their own.

The Giants hold the 6th pick, which might put them in a precarious position when drafting a quarterback. The Arizona Cardinals hold the 1st overall pick in the draft this year. Last year, the Cardinals traded up to the 10th pick to draft quarterback Josh Rosen. Because of this, they do not need a quarterback and could trade their pick away to a quarterback-needy team. That team could be the Giants.

If the Giants want to prevent teams like the Broncos, Jaguars, Dolphins, and Raiders from taking their quarterback of the future, they could trade for the 1st overall pick. Then the Giants could select whoever they wanted. If the Giants were to make this move, they would do so in order to select Dwayne Haskins.

It is rumored that the Giants and Cardinals have been in contact regarding a trade for the number one pick. The rumor states that the Giants called to ask the Cardinals their price and the two teams have been in contact since. Trade talks have not been confirmed, but a few outlets have been circling this rumor around this week. This rumor is very exciting for Giants fans, but unfortunately, at this point, it is only a rumor.

What Would It Take To Make The Deal?

The Giants would have to give up the 6th pick, of course. But on top of that they would likely need to give up at least two more picks. The Giants’ second round pick is worth 530 points, totaling the two Giants picks at 2,130. In order to make up the 870 points the Giants are missing, they will likely need to throw in their 2020 1st round draft pick. The fact that the Giants would be getting a quarterback with this deal may inflate the price. So if the Giants need to throw in a 2020 second-fifth round pick also, that should come as no surprise.

In 2004, the Giants made a draft day trade to acquire Eli Manning. Manning was selected first overall by the Chargers, so it was essentially like they were trading for the 1st pick. The Giants held the 4th pick and selected Philip Rivers with the intent to trade him to San Diego. The Chargers and Giants did strike a deal, bringing Manning to New York.

If the Giants want to move up to select Dwayne Haskins (or any other quarterback), the 2004 trade for Manning could be a good model to project what they would need to give up in 2019.