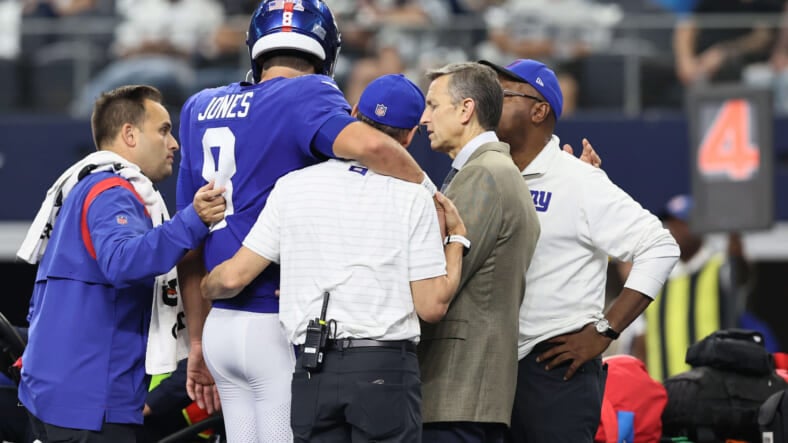 The New York Giants fell short in their Week Five matchup with the Dallas Cowboys. The Giants’ record falls to 1-4 after their 44-20 loss to Dallas.

The Giants lost in more than one way today. They lost the game but also lost multiple key players to injury. Daniel Jones (concussion), Saquon Barkley (ankle), Kenny Golladay (knee), and Rodarius Williams (knee) all suffered injuries during today’s contest that kept them OUT for the game. Updates to come, but seemingly every injury was significant.

If there was a bright spot for the New York Giants, however, it was 2021 first-round pick Kadarius Toney. The rookie wide receiver had a breakout performance. Toney caught 10 passes on 13 targets for 189 receiving yards and 7 rushing yards on one rushing attempt.

The Giants’ offense fizzled out upon the loss of Daniel Jones. The Giants’ starting quarterback suffered a severe concussion that resulted in him getting carted off the field. New York hopes to see their young quarterback recover and return to the field soon.

The Dallas Cowboys ran at will on the New York Giants defense. The Cowboys totaled 201 rushing yards thanks to a strong Ezekiel Elliot performance (110 rushing yards and 1 touchdown). Dallas had an overall elite offensive performance, totaling over 500 yards of offense including 302 yards through the air from Dak Prescott.

Mike Glennon filled in for Daniel Jones and turned in 2 interceptions including a pick-six in the fourth quarter. Dallas’s defense constantly put pressure on the Giants’ quarterbacks.

The New York Giants will be back at home next week to host the Los Angeles Rams. They have fallen in a hole after five weeks, being placed alone at the bottom of the NFC East. It seems like one again, the Giants’ season might give fans a reason to start looking into the NFL Draft early.