New York Giants: LB Blake Martinez OUT for the season with a torn ACL 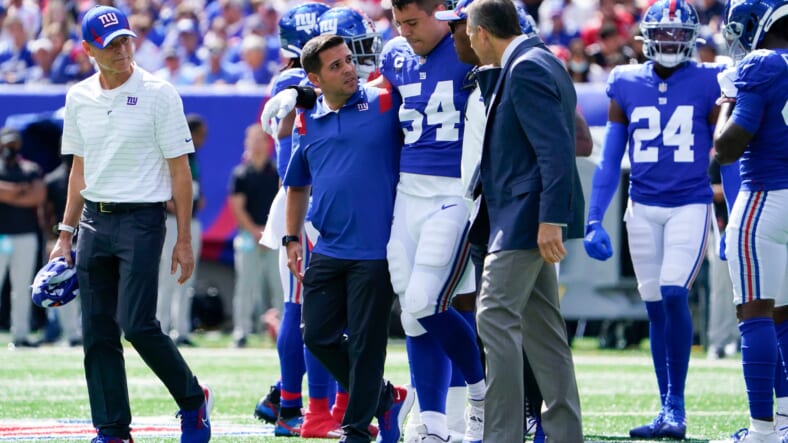 The New York Giants experienced another crushing loss this morning. It was reported that inside linebacker Blake Martinez suffered a torn ACL during yesterday’s pitiful loss to the Atlanta Falcons. Martinez will miss the remainder of the 2021 season as he hopes to recover fully and bounce back in 2022.

Blake Martinez went down with this injury early in the first quarter of yesterday’s game. It was feared to be an ACL injury, but there was no confirmation until now.

This is a huge loss for the Giants’ defense. Martinez is arguably one of the best inside linebackers in the NFL. He has totaled 140 or more combined tackles in each of the last three seasons. The Giants also invested a significant amount of their salary cap space (3 years, $30.75M) into Martinez, the captain of their defense.

How will the Giants supplement this loss?

The Giants will be without their starting inside linebacker for the rest of the year and they do not have an abundance of depth at the position. Tae Crowder played all but one of 62 defensive snaps yesterday, filling in for Blake Martinez.

The Giants’ new inside linebacker options are Tae Crowder and Reggie Ragland. Both are viable players, however, they are nowhere near the same level of quality as Blake Martinez. Carter Coughlin could also see more playing time as a result of this development.

The Giants should be encouraged by Tae Crowder’s development. The second-year player has big shoes to fill as the Giants’ starting inside linebacker with Blake Martinez out for the year. Crowder, Ragland, and Coughlin will attempt to supplement this humungous loss for New York’s defense.

Reggie Ragland signed this offseason to back up Martinez as a run-stuffing inside linebacker. Carter Coughlin transitioned from edge rusher to inside linebacker this offseason. Coughlin could provide the Giants with a solid pass-rush boost through the interior. The Giants will feel the absence of Blake Martinez, but they do have some quality depth pieces to fill-in in the meantime.