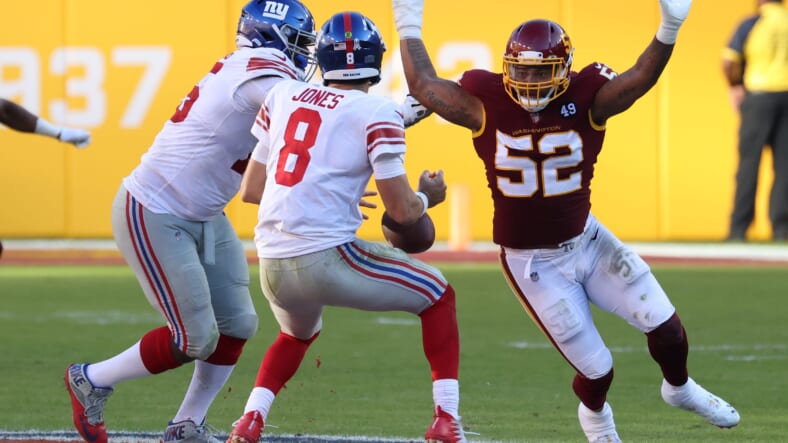 Another Alabama product, what a surprise! The New York Giants signed outside linebacker Ryan Anderson on Tuesday morning, plucking him as a free agent formally of the Washington Football Team. Anderson has played his entire career in Washington since 2017, playing in just nine games last year behind a stacked defensive front.

However, with support needed at OLB, the Giants need to add a bit of competition for training camp. Anderson is capable of being a solid rotational player, and with Lorenzo Carter and Oshane Ximines expected to make a return in 2021, it is gearing up to be a competitive off-season.

What does Ryan Anderson bring to the New York Giants?

Anderson has a few nice traits, including a refined ability to strip the football. In 2019, Anderson started in four games and played in all 16, recording five forced fumbles and 4.0 sacks. He added 44 combined tackles, nine QB hits, and four tackles for loss. During that season, he also recorded a 6.4% missed tackle rate and 19 pressure on the quarterback.

Some Ryan Anderson love for your timeline!

What I like the most about Anderson is his ability to create turnovers, using a nice punching fundamental to dislodge the football from opposing ballcarriers. He seems to be Johnny on the spot, and the Giants are essentially replacing Kyler Fackrell with Anderson, a player who has proved to be healthy and can produce in some capacities.

Anderson is another player who will earn the veteran’s salary benefit, so his cap hit should be just about $987.5K. That will include $137.5K and guaranteed money.

The Giants are making a few solid depth moves with low salary hits, which will ultimately benefit them tremendously this upcoming season. With a market flush with talent and not much money to go around, Big Blue is using a majority of their 2022 cap space to fit these big contracts in.

Anderson will probably serve a one-year deal, but if he performs well, he could always stick with the Giants moving forward. I like the signing, as he provides competition to a position of weakness, and the Giants still have the draft to address it if need be.