New York Giants: Kyle Rudolph set for injury return in the near future 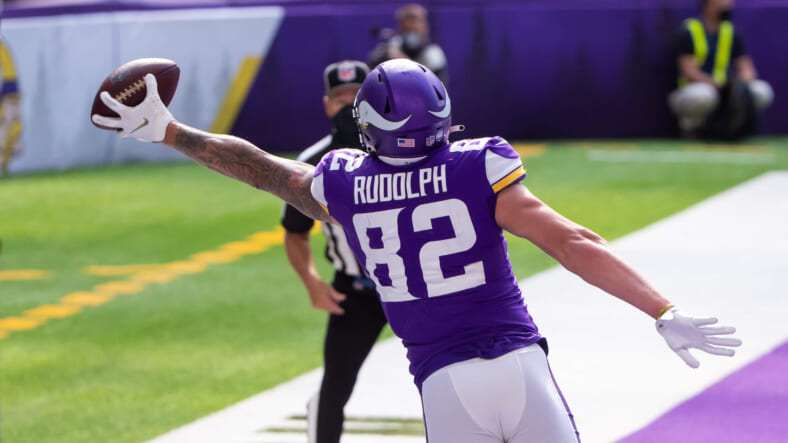 When the New York Giants made the move to pick up tight end Kyle Rudolph in free agency, they got more than they were bargaining for. The player ended up on the physically unable to perform list after a foot injury was found during Rudolph’s physical, and it’s looking like that injury could last into the regular season. For what the Giants are paying Rudolph, many would consider his signing a mistake on the part of the team if he does come into the season at less than full strength.

However, there’s signs that Rudolph may be nearing a return come the final week of the preseason. Those signs are in the fact that Rudolph was seen working out on the field before the Browns game, both running routes and catching passes from Daniel Jones.

Kyle Rudolph, who remains on PUP as he recovers from foot surgery, ran routes and caught passes from Daniel Jones pregame. First time I’ve seen Rudolph do that. I expect his workload to be ramped up this week pic.twitter.com/c9m5FzqNF1

Pass catching ability is what the Giants will want to see from Rudolph considering his role as a receiving tight end. If he’s back to running routes and bringing in passes, it’s likely not that long before we see Rudolph on the field for real.

It’s important for the Giants that they get Rudolph back before their final roster cut. If he isn’t off the PUP list by then, he’ll have to miss the first six weeks of the season before being allowed to return.

The Giants have one more preseason game, set for this Sunday against the Patriots at MetLife Stadium. It seems unlikely at this point that we’ll see Rudolph then, but there’s a real chance that the tight end is off the PUP list before the final roster cut and available for week 1 of the regular season.