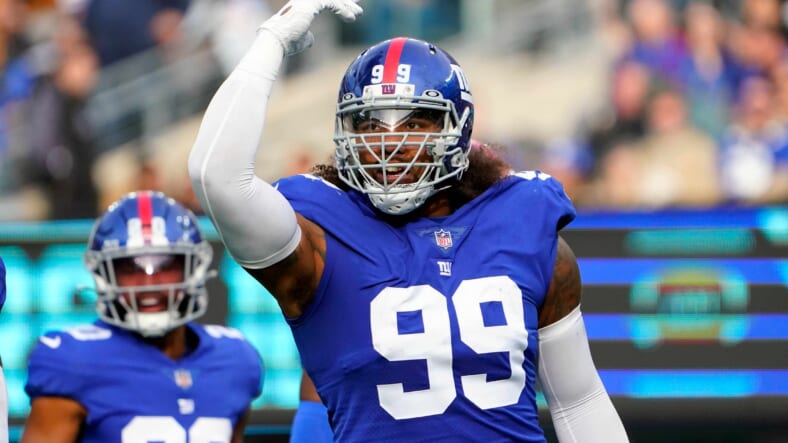 The New York Giants are likely getting back a number of key players from injury in Week 5. On the defensive side of the ball, two players will return to the lineup with the ability to make a significant impact in the Giants’ matchup with the Green Bay Packers. After missing the last three games of the season, Leonard Williams is listed as questionable to play on Sunday, but it is believed he will start the game. Additionally, safety Julian Love is returning to the lineup after missing the second half of last week’s game with a concussion. These re-additions to the lineup will be massive difference makers for Big Blue.

The New York Giants have been without defensive lineman Leonard Williams since Week Two. In the Giants’ second game of the season, Williams suffered a knee injury that has kept him sidelined for two weeks. The Giants are hoping that Big Cat will be ready to return to the field in London on Sunday.

Leonard Williams’s absence has been felt. The Giants’ run defense has not performed well since Williams was sidelined. After holding Derrick Henry to only 82 rushing yards in Week One, the Giants have allowed a running back to cross the 100-yard threshold in each of their last three games. Big Blue is currently allowing 141.0 rushing yards per game (28th in the NFL). Entering a big matchup with the 3-1 Packers on Sunday, the Giants are preparing to face Aaron Jones, one of the NFL’s most talented running backs. Getting Leonard Williams back into the lineup will be a big help as New York attempts to slow down Jones and the Packers’ offense.

In the other facet of the game, safety Julian Love will make an impact as the Giants attempt to slow down Aaron Rodgers. The four-time NFL AP MVP is reportedly ready for the Packers to start “airing it out.” Rodgers might not be playing his best football so far this season, throwing six touchdowns with three picks in four games, but he is ready to turn things around. Julian Love has started as safety for the New York Giants in every game this season. Without him in the lineup, Rodgers would have had a clear weakness to expose. Julian Love’s presence on the New York Giants’ defense should aid to prevent Aaron Rodgers from having a big bounce-back performance in London.