New York Giants: Just How Much Has Davis Webb Improved? 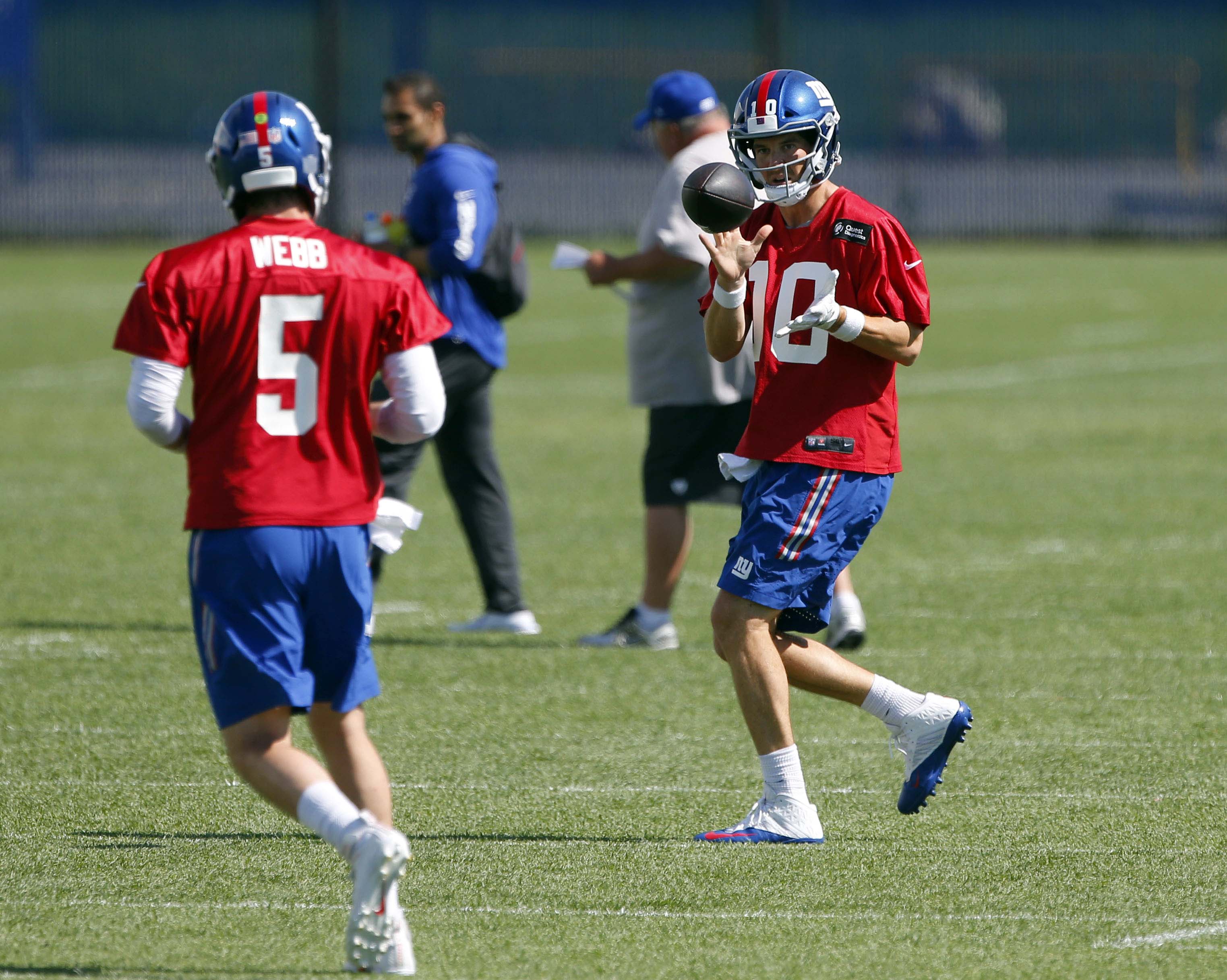 Flashback to the New York Giants‘ training camp where rookie quarterback Davis Webb took the field for the very first time with pads on. Many mistakes and miscues later, Webb noticed how difficult becoming a franchise quarterback in the NFL would be, but that didn’t stop him from giving every inch of his being to achieve his dream.

Webb maintained his confidence and work ethic throughout the obstacles of progression; staying late after practice, following Eli Manning around like a puppy dog, working on his free time, and hiring a personal trainer to refine his skill-set. All of the tools he’s built over the last year have been at the hands of his superb mentality and drive for success. Becoming a starting quarterback in the NFL is no fluke, and the rising sophomore signal caller knows that, but he also knows dethroning Manning is impossible. He must wait for his opportunity to take the torch and run with it, and that chance will arise in pre-season, just a few months away.

When the Giants hired offensive coordinator Pat Shurmur to take over the head coaching position, Webb made sure his preparation and first impression were impeccable. Him and Eli spent countless hours at the training facility memorizing the system and understanding the offense before they could even speak with the coaches. While the playbook wasn’t directly made available, both quarterbacks studied his scheme in Minnesota, watching every move on the line of scrimmage and every mismatch Shurmur looked to exploit.

Manning has learned three different offensive systems in the last five years, and Webb two in just his second season. The former Cal product is a dedicated note taker and learning connoisseur. He understands defenses and the positioning of the players, giving him an advantage mentally. Manning does something similar, given his physical attributes fail to blow anyone away. Webb has his youth and is learning how to understand the psychological aspect of the game far ahead of his time. Often times, a young quarterback will overwork their bodies in favor of avoiding the mental preparation before games. Take RG3 for example – he relied on his legs far too often while he failed to understand the mental aspect of the game and how to prolong your career by not taking unnecessary hits. With the league focusing on head injuries, players are now aiming for the knees and legs of runners, making the game more dangerous from the waist down.

If you’ve ever played on a sports team you’ve heard the phrase, “practice makes perfect.” For Davis Webb, this statement couldn’t be more true. His ability to learn the scheme and invest himself in his passion is unique. That’s why when minicamp rolled around, he stated, according to Forbes:

“I just said, ‘Hey, this is what I’ve been watching and this is kind of what I think we’re going to do,’”

“We ended up doing a little bit of what I saw, though some of the other stuff I saw on film didn’t carry over and I don’t know if it will.”

Shurmur tailors his offensive scheme around the strength of his players and what best suits their needs. Adding Saquon Barkley completely turns the offense on its heels, as they now have a tantalizing threat out of the backfield to compliment Odell Beckham Jr.

While Webb is itching to get on the field and utilize these weapons, he understands that learning and watching from a two-time Super Bowl winning quarterback is something that doesn’t come around very often. Extracting the most value and knowledge from Manning is his No. 1 priority and it will remain that way until the very second he retires.

“I don’t know what life would be like without him as a teammate, but I do know he’s the best teammate I’ve ever had,” Webb said. “So when you get to see the best guy that ever played in this franchise’s history—to see the way he handles himself in interviews, how he does charity functions and how he even handles his kids—you take just about every freaking note you can.”

“Now I’m just adding on to it big time under the best player ever. He sets the tone every single day. And he’s really been fun to watch this spring—I’ve never seen him practice this good.”

Webb has a long way to go before he has reached a place of starting potential; his life revolves around improving in any way possible before his big opportunity comes knocking on the door. His mentality towards perfection and development has not wavered, despite Manning stating he would like to play several more years.

“I’m planning to study at least four hours a day, things like protections and stuff,” Webb said. “When I look back at this spring, it was probably the most practice reps I’ve had since coming to the Giants. I still made mistakes, but I didn’t make the same mistakes twice.

“Before I get back to training camp, I want to study my notes, study the things I did well and the things I messed up. I want to go back and watch every play from OTAs—there’s maybe a 1,000 or so—and get ready to build on all that in training camp.”

When you’re a player in the NFL you never know what’s going to happen. What may seem like a normal day at one moment, might result in a devastating injury the next. Playing a sport offers a risk every time you step on the field, and Webb knows that. If Manning were to go down, he believes that he could fill his role admirably, and if that circumstance arises, I wouldn’t prefer any other backup to take his place.