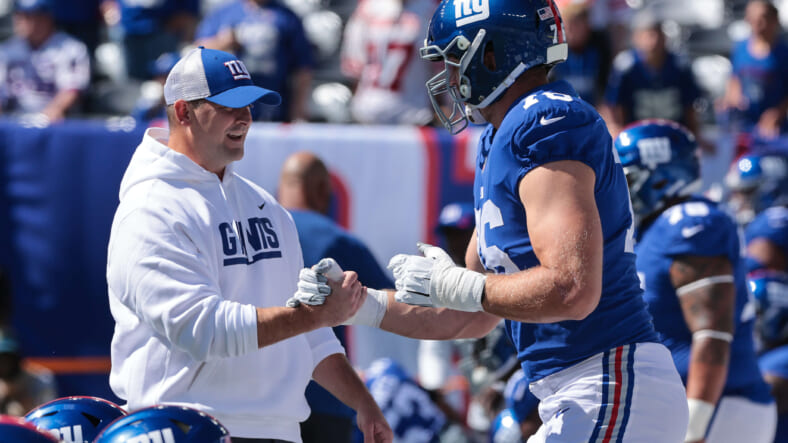 There’s bad news, for New York Giants fans that were hoping for a change at the tackle position. Despite mounting pressure from fans, the media, and even former players to give more snaps to Matt Peart rather than Nate Solder, it seems that Solder has received a vote of confidence from Joe Judge.

That vote of confidence came on Wednesday when Judge addressed the media and was asked point blank why Nate Solder is playing at right tackle rather than Peart.

“Weâ€™re pleased with the way Nateâ€™s really progressed throughout this year and how heâ€™s playing for us right now. Heâ€™s a guy who comes out and works tirelessly,” Judge said.

Based on the rest of Judge’s answer, it doesn’t look like making Peart the starting right tackle is in the team’s plans for now. It looks like his role is as more of a situational player, for whatever reason.

“Weâ€™re using Matt in a lot of jumbo tight end type of situations. Heâ€™s expanded on his roles there. Weâ€™ve worked with him early in the year in terms of some guard stuff. Really, his home at tackle is where heâ€™s progressing, but heâ€™s given us contributions along the way as we go. Talking specifically about Matt, we do expect him to play throughout different situations and different games,” Judge further explained.

While Judge says that Peart is still in the team’s plans, his low snap counts seem to contradict that. Peart only played 5 offensive snaps against Tampa and 9 against Philadelphia.

It’s unclear if Peart is the right player for the job, but at this point, many would like to see him get a shot as the Giants can’t go much lower at the position.

Despite receiving praise from Judge, Solder has played like one of the worst tackles in the league this season and is clearly below a starting level at this point in his career.

It’s clear that Judge doesn’t just want to throw his players under the bus and acknowledge merit in the criticisms of Solder, but at this point, the response comes off as another tone deaf statement that fails to account for the team’s poor play compared to its expectations.

Whether or not Judge’s management of situations like these will come back to bite him when his job status is reviewed in the offseason remains to be seen.