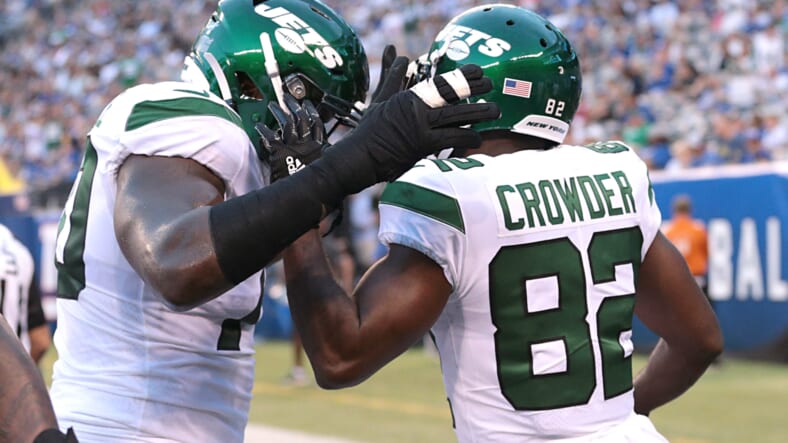 It’s not a matchup that comes around often, but the New York Giants are about to meet the New York Jets on Sunday to see which team is the best in the city – even if both teams are undeniably in a bad state right now, with the Giants having only two wins in their name and the Jets only having one. Any expectations for the season were shattered early on for both teams, but there’s something other than record at stake here: pride.

Based on the run up to the game, it seems that the Jets might be the team more motivated to play for pride, while much of the conversation around the Giants has centered around whether or not the team will and should fire head coach Pat Shurmur for his failures to make an improvement from last year.

“It’s something that probably didn’t really hit me really until I was here for a little bit and just kind of realizing two teams in the same city, same stadium. You don’t appreciate that when you’re somewhere else until you’re here, and then you kind of realize having two teams in the same city in New York, it’s just different. I can see why there is a rivalry there,” said Jets head coach Adam Gase, speaking to the team’s site about the upcoming game.

“In my mind, I’m like, ‘Aw, shoot, this is the Battle of New York.’ Let’s go. For me it’s a special game. I got all my boys â€” I’ve known Leo since 2010, I’ve got Lorenzo Carter, Alec Ogletree, Deandre Baker,” added Jets outside linebacker Jordan Jenkins, who will face the Giants in the regular season for the first time. “So yeah, this one is different because it’s braggin’ rights between me and the guys I played ball with back in the day.”

Meanwhile, the Giants are at a risk to come into this game demotivated following a loss to another rival, Dallas. It was a game the Giants could have won, but a number of mistakes including allowing Dallas to take the lead right before the start of the second half blew what chances they had of an upset.

Much of the blame has fallen on head coach Pat Shurmur, and the narrative for this game isn’t about the rivalry with the Jets, but about whether or not Shurmur will escape week ten without losing his job. Will this controversy about the coaching job end up being detrimental to the team? It’s hard to tell, but it’s at the level where it’s impossible toÂ ignore, especially with some branding this game as a make or break one for Shurmur’s hopes of lasting the season.

The Giants are also still struggling with injuries – Evan Engram has been ruled out for week ten thanks to picking up a midfoot sprain in week nine, and Sterling Shepard is still out with a concussion that’s been troubling him all season long. Even if Daniel Jones shows up in full form, he won’t have a full arsenal to work with in terms of receiving weapons, something which hasn’t helped the Giants earlier in the season.

Should a loss against the Jets be expected? Not necessarily – the Jets aren’t the best team themselves, with only one win so far. However, the combination of them being motivated for the matchup and the Giants suffering from coaching controversy and injuries might just give them the edge they need. The game will very likely be close, but it remains to be seen whether the Giants will be the team on top at the end of the day.