New York Giants: Jeff Okudah is the key to a heavenly NFL Draft for Big Blue 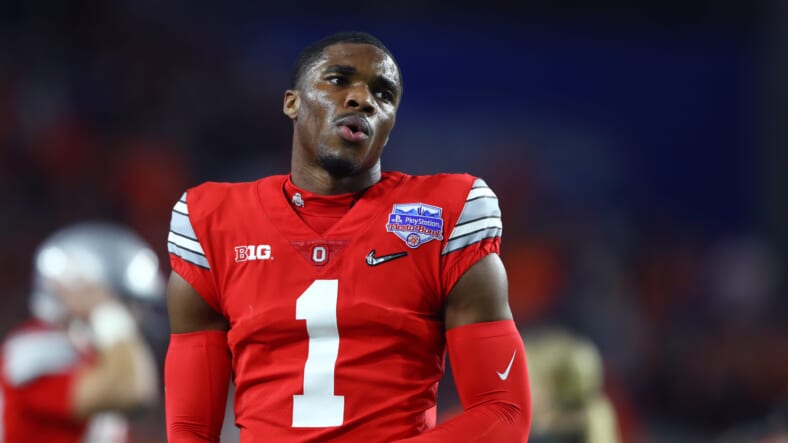 The New York Giants have several directions they can go in the 2020 NFL Draft, but Jeff Okudah is a critical piece to the puzzle.

Predicting how the 2020 NFL draft will unfold is virtually impossible, considering how many directions the top four teams could go. The Cincinnati Bengals are all but locked into the number one spot to Draft LSU quarterback Joe Burrow. However, there have been rumors that the Miami Dolphins are speaking with Cincinnati about potentially trading up. I do not believe they want to move out of the No. 1  slot where they are no longer able to draft a sure-fire franchise quarterback.

That reality ultimately opens up a bidding war for Tua Tagovailoa and Justin Herbert. The Giants sit with the fourth overall selection in the draft, a perfect place for them to either sit pretty and wait for a player like Isaiah Simmons, a top offensive tackle prospect, or even Ohio State star pass rusher, Chase Young.

Ruling out the slim chance of landing Chase Young would be ignorant, considering how Jeff Okudah’s draft stock is rising. The Ohio State cornerback is regarded as a home run draft pick amongst most teams, as he can fill the number one corner role with ease.

â€œTo me, he is what Stephon Gilmore was coming out, what Patrick Peterson was coming out,â€ ESPN draft analyst Mel Kiper Jr. said. â€œHe is going to be expected to be one of the best cornerbacks in this league.â€

In the scenario that the Washington Redskins draft a quarterback, the Detroit Lions are the only thing between Young and Big Blue. Okudah offers Detroit a lockdown corner in the secondary, and they recently traded away their top player in Darius Slay. Matt Patricia, the head coach of the Lions, has always enjoyed having a real shut down corner to work with. While he was the defensive coordinator for the New England Patriots, he enjoyed the talents of Malcolm Butler.

With Detroit signing Desmond Trufant, who spent an injured year with the Atlanta Falcons in 2019, there’s evidence to suggest Okudah is their guaranteed selection. They do have weaknesses at pass-rush, but the Pats never featured top-notch, expensive pass rushers in New England, which could suggest they will go with the OSU corner.

Ultimately, Detroit, being locked on Jeff, gives the Giants immense leverage in a trade-back scenario as well. If Gettleman can execute a trade-back and gain more capital to locate towards solving voided positions, the Giants will be in prime position to upgrade spots of weakness.