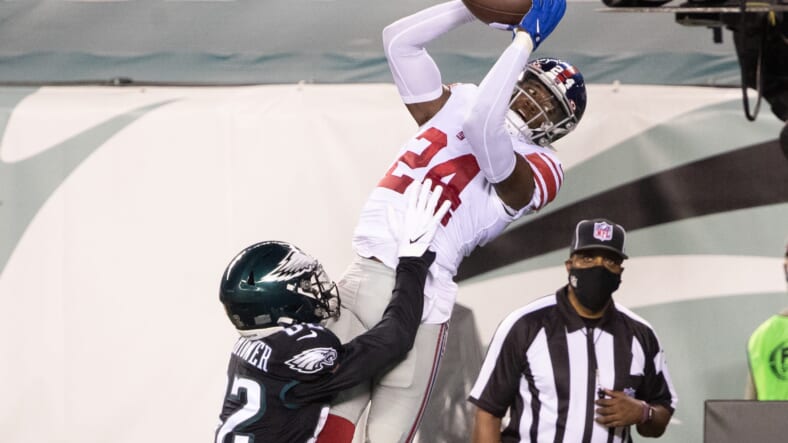 The New York Giants enjoyed having one of the top defenders in the NFL on their team last season. In 2020, James Bradberry led the way to make New York’s defense a top-ten unit in points allowed per game. Bradberry was a shutdown cornerback for the Giants that put together an incredible statistical season.

The New York Giants made a splash in the 2020 NFL offseason when they signed cornerback James Bradberry. The Giants and Bradberry inked a three-year, $43.5 million deal. New York’s new cornerback spent the first four years of his career with the Carolina Panthers, where he was drafted by current Giants general manager Dave Gettleman.

In 2020, James Bradberry locked down everything deep. The Giants basically had an extra safety on the field with Bradberry at cornerback. On targets 20+ yards downfield, James Bradberry allowedÂ 0 touchdowns and totaledÂ 3 interceptions (T-2nd) according to PFF.

But Bradberry was not just a beast on the deep ball. He was also a true lockdown cornerback that could go one-on-one with any wide receiver. James Bradberry forced 14 incompletions in single coverage, tied forÂ the mostÂ in the NFL in 2020 (PFF).

Despite leading in all these statistics and shutting down opposing wide receivers week in and week out, James Bradberry did not make an NFL All-Pro team. He did make PFF’s All-Pro Team, though. BradberryÂ set a new career-high with 18 passes defended, which was tied for the second-most in the NFL and only two behind Miami’s Xavien Howard for the league lead (Giants.com). PFF gave the 27-year-old cornerback the recognition he deserved, but it is time for the rest of the NFL to put some respect on James Bradberry’s name.