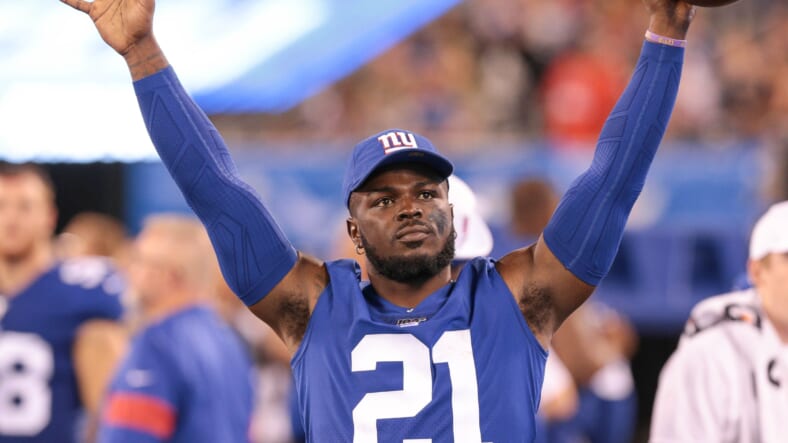 TheÂ New York GiantsÂ announced on Saturday that they are placing safety Jabrill Peppers on injured reserve. 2019 was Peppers’s first year as a member of the New York Giants. Jabrill was acquired in the infamous Odell Beckham Jr. trade with Cleveland.

The Giants considered acquiring Jabrill Peppers to be necessary to complete the trade to send Odell to the Browns. In his shortened 2019 season, Peppers flashed the traits that made him a “must-have” to Dave Gettleman and the Giants, but the consistency was not entirely apparent.

With his inconsistent season coming to an early end in Week 14, it is a bit difficult to look at Jabrill’s future with certainty. Peppers was brought to the Giants to be a long-term building block on defense, but entering a contract year and failing to live up to the hype in 2019, he will have a lot to prove in 2020.

Jabrill PeppersÂ had a volatile 2019 season. There were a lot of big splash plays and a few impressive performances, but he was never able to sustain consistent success as the Giants’ safety this year.

The former 1st-round pick played and started in 11 games this season. Jabrill suffered aÂ transverse process fractureÂ in his back and was expected to be out for three weeks, but the Giants shut him down for the season ahead of their Week 14 matchup. This was a smart move by the Giants since back injuries are especially dangerous, and it would be highly problematic to rush a player back from that kind of injury, especially when the team has been eliminated from the playoffs and has nothing legitimate to play for. Instead, the Giants are wisely giving their safety an ample amount of time to heal and prepare for next season.

In the 11 games he played in,Â Jabrill PeppersÂ totaled 76 combined tackles with 5 tackles for loss. He also added 3 forced fumbles, 1 interception, and 1 pass deflection. These stats are impressive, but they do not tell the full story. Peppers did miss 11 tackles this season and had a few occasions of inadequate coverage, allowing receivers to run open downfield.

For the most part, however, Jabrill Peppers was one of the best players on the Giants’ defense in 2019. He allowed a quarterback rating of only 71.5 and gave up 0 touchdowns in coverage. Peppers will need to work on cutting down opposing quarterback’s completion percentage, though, as he allowed 63.9% of passes thrown his way to be caught. Overall, these are improved numbers from his last season in Cleveland.

Is Peppers A Building Block?

Julian LoveÂ has been starting in Jabrill Peppers’s place since he went out with his back injury. Granted, Love has played only a fraction of the snaps that Peppers did this season, but Julian has played a consistently high-level of football in his limited playing time.

For comparison, in Love’s 107 snaps this season, he has been given an 87.7 overall grade byÂ Pro Football FocusÂ with an 86.5 coverage grade. In 705 snaps, Jabrill recorded an overallÂ PFF gradeÂ of only 66.5 and a coverage grade of 70.2.

Julian Love!!! Guy had a rough week in his personal life. Getting his first real reps this week and his first NFL interception!! pic.twitter.com/9DKp2gYaIc

The good news for Peppers is that there are two starting safety positions on defense. Peppers has a much different playing style than Love as he is more of a run-defending safety, and Love is more a coverage guy. The Giants could move Julian Love to free safety and keep Jabrill Peppers as the strong safety. There is potential to create a dynamic defensive duo at the safety positions with these two young players.

Giants had a tough game but Jabrill Peppers is becoming a playmaker and causing havoc for offenses. He almost got it last week for catching Dwayne Haskins first NFL touchdown, but @JabrillPeppers is my Week 5 #BobbysBAMF pic.twitter.com/GlaBWU8lKi

But Jabrill Peppers will need to show improvements in his game in 2020 to be considered a long-term building block. The free-agent market for safeties went through the roof this past offseason, and the Giants made it clear they will not overpay for a defensive back (see Collins, Landon). Jabrill will be a free agent in the 2021 offseason, and the Giants will need to see more consistent production to offer a lucrative contract extension (especially if there is a new regime by then).