New York Giants: Is Dwayne Haskins a Possibility With the No. 17 Overall Pick? 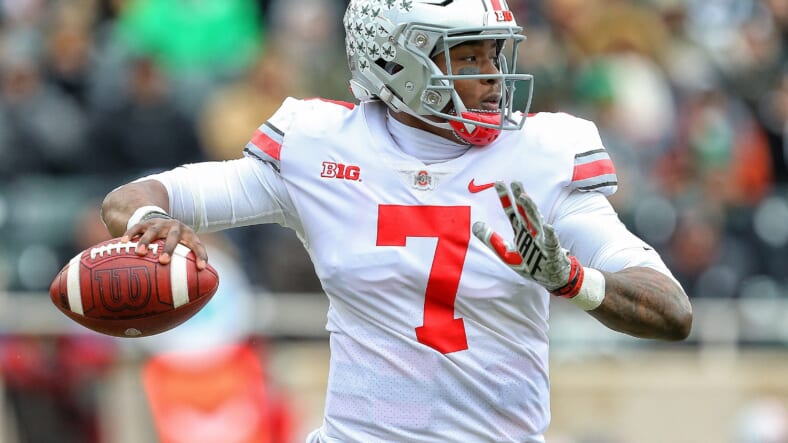 Recent reports have indicated that Ohio State star passer Dwayne Haskins’ stock could be dropping after Drew Lock entered the spot light. The offseason is generally full of ups and downs, including the elevation and dropping of players throughout the course, but this could be another media driven narrative. The New York Giants are in play to grab the 50 TD pass quarterback in the 2019 NFL draft, but it ultimately comes down to his draft spot.

The question is, will Haskins potentially drop to the No. 17 overall pick? If the Giants could snag the passer with the mid-round first they acquired in the Odell Beckham Jr. trade, they would walk away looking like geniuses.

Peter King in his “Football Morning in America” column stated:

â€œIn fact, I keep hearing Dwayne Haskins is sinking, and may be the fourth passer picked in this draft.â€

If this is true, the Giants would be wise to wait until the 17th pick to snag Eli Manning’s successor. Haskins has the physical tools to be a premium quarterback in the NFL, but his lack of mobility and athleticism strikes a negative chord in the hearts of Giants fans.

Only a month ago Haskins was regarded as the No. 2 option in the draft behind Kyler Murray, which makes the timeliness and credibility of this statement rather interesting. After all, it’s three weeks before the draft and the smoke has been deployed.

The New York Giants have a difficult decision ahead of them:

The other two players that could pull ahead in the QB race are Drew Lock and Daniel Jones. Both of these alternatives have solid attributes but lack the consistency Haskins enjoyed in a record-breaking season behind center. Out of the three, the Giants would likely be better off with Dwayne – a true professional with high-level football intelligence translating into elite progressions and vision.

In addition to his intangibles, Haskins has great arm strength and accuracy. The primary knocks on him are his slower throwing motion and lack of movement. It’s certainly possible the Giants wait until their second first-round pick to grab a QB, hoping that Lock or Haskins remain on the board. This would be a best-case scenario given the Josh Rosen rumors are false.