New York Giants: Is Dion Lewis The Right Man To Back Up Saquon Barkley? 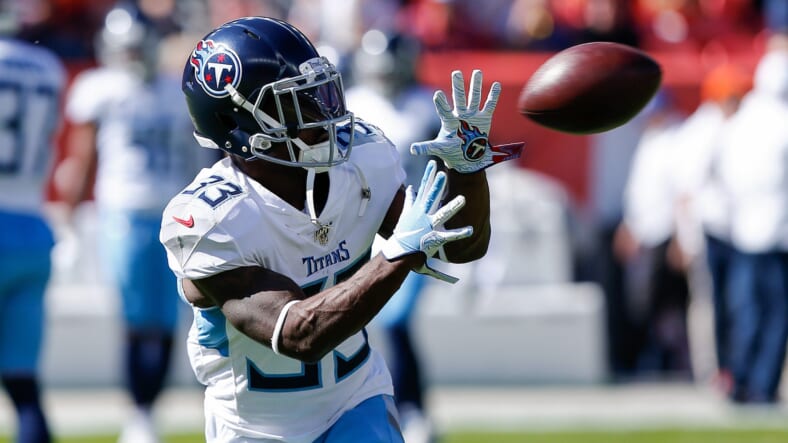 Coming off a challenging sophomore season with the New York Giants, Saquon Barkley is poised to make a booming return in 2020. Following a strong draft that revitalized a struggling offensive line with bright, young talent, everything’s in place for Barkley to have his best season yet. Back to his ridiculous workouts and staying as active as he can, Barkley is ready to be the weekly 20+ rushing attempts running back the Giants have been in need of.

Although Barkley certainly seems to be almost inhumane with his athleticism and talent, everyone saw last season that injuries can sideline even the best of the best, including Barkley. To prepare for the worst, the Giants signed running back Dion Lewis, a veteran who not only compliments Barkley’s skill set but also brings tremendous versatility. At only 5’8″, Lewis has a low center of gravity that provides him with remarkable quickness, shiftiness, and balance that is very difficult to defend against. Playing with the likes of LeSean McCoy, Tom Brady, James White and Derrick Henry, Lewis has learned from some of the best players in the league. And coming off three straight seasons where he’s played all 16 games, Lewis has shown why he’s such a valuable and resilient asset (ESPN).

But ever since the New England Patriots won the Super Bowl in 2017, Lewis’s numbers have certainly taken a hit and so has his role. Transitioning more and more into a second or third-string running back, there’s a reason behind Lewis’s decline in productivity and it’s fair to question his worth. James White outplayed him and took his role in New England and Derrick Henry virtually showed last season that the Titans really don’t need him. With Barkley’s role only growing in size to the likes of Henry, it’s certainly hard not to wonder if Lewis may find himself in a similar situation that he had in Tennessee, which led to his inevitable exit.

That being said, Lewis makes for one of the most underappreciated running backs in the league and offers plenty of talent the Giants could use on offense. Even though Lewis is a running back, what really makes him so special is his ability to catch the ball. In fact, Lewis rarely failed to catch a ball thrown his way last season. If you look at his game log, he went 3-4 against Cleveland in week 1, 4-5 against Atlanta in week 4, 3-3 against Denver in week 6, 5-5 against Carolina in week 9, and he also logged in another six games where he went 1-1 (ESPN).

Lewis has some of the best hands in the league for his position and when it comes to passing third down plays, remains to be an excellent weapon for quarterback Daniel Jones to pass to, be it on screenplays or dump off tosses. To give you an idea, Lewis had 25 receptions out of 32 targets last season, essentially reining in a little over 78% of the passes thrown his way (ESPN).

Out of those 25 receptions, he caught 10 of them for 61 yards on 3rd down, averaging 6.1 yards per catch (ESPN). Although Barkley can be put in on third-down passing plays as well, Lewis makes for a better fit for this role and will make it nearly impossible for linebackers to defend him out of the backfield. In addition, Lewis is also pretty clutch when called upon, collecting 9 receptions for 55 yards and a touchdown all in the 4th quarter last season (ESPN).

At the end of it all, Lewis is the full package. Whether the Giants choose to line him up in the slot or use him out of the backfield, Lewis knows how to maximize his skill set in whatever situation you put him in. Furthermore, with Barkley handling the vast majority of the run game, the Giants needed another running back that can excel at everything else Barkley doesn’t do or provide for his team, and Lewis is the right man for that job.

Moreover, Barkley is still quite young, and Lewis brings excellent knowledge and insight that could really elevate Barkley’s understanding of his position to another level. Prior to his arrival, Barkley had Wayne Gallman and Jonathan Hilliman as his backups, two running backs who don’t bring a whole lot of experience and flexibility to meld around Barkley’s role. But with Lewis, it’s a completely different ball game. Providing a level of balance that compliments Barkley’s play exceptionally well, Dion Lewis was a great find and has everything at his disposal to thrive as a backup with the New York Giants.