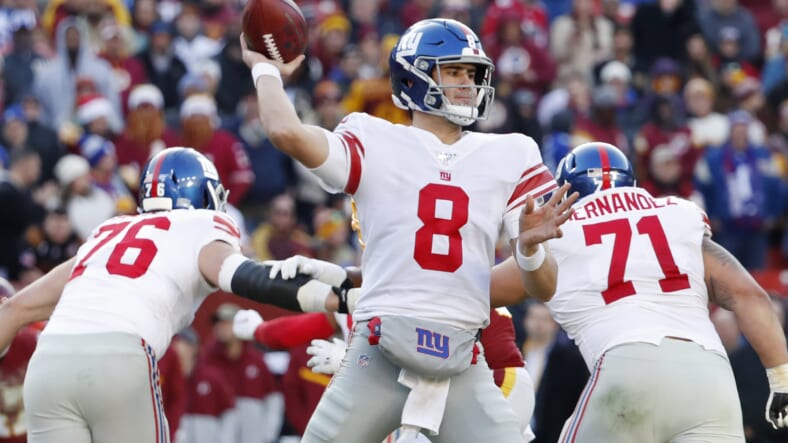 The New York Giants will take on the Washington Football Team in week six of the 2020 regular season. The Giants are currently 0-5 and Washington 1-4, but both teams are undergoing changes on a weekly basis.

Washington has already seemed to move on from second-year quarterback Dwayne Haskins after they inactivated him and have already begun seeking trade partners. Whatever Haskins did behind the scenes rubbed head coach Ron Rivera the wrong way, and that was a big reason Rivera reunited with Kyle Allen, who was his quarterback in Carolina last year.

On the other hand, the Giants have Daniel Jones, Haskinsâ€™ alternative from the 2019 NFL draft. Jones has had his moments in the NFL, showing poise and patience in the pocket at one moment and the next turning the ball over with a fumble or interception. This year, he has been hot and cold, but the offensive line, a lack of talent, and successful schematics have played a significant part in his demise.

This game could go either way, but the Giants desperately need their first victory of the season under new head coach Joe Judge.

How to watch New York Giants vs. Washington Football Team:

There are several keys to victory for a Big Blue, and then ultimately boils down to winning the turnover differential, putting Kyle Allen on the turf, and being creative on offense.

Starting with the turnover differential, Jones has thrown five interceptions and fumbled four times. Left tackle Andrew Thomas has been a liability and put Jones under immediate pressure frequently. Washington currently ranks 10th in the NFL with 46 sacks, and they have one of the best pass-rushing groups. This will be a serious challenge for the Giants, who have struggled in pass blocking through five weeks.

Creativity on offense is another essential. The Giants showed a spark of life in the first quarter against Dallas, and they must continue to build off of that. Garrett used plenty of pre-snap motion and got the ball to his playmakers, something we hadnâ€™t seen up until that point.

I think that this game is going to be low scoring since Kyle Allen doesnâ€™t know the offense all that well, and the Giants simply canâ€™t put points on the board.