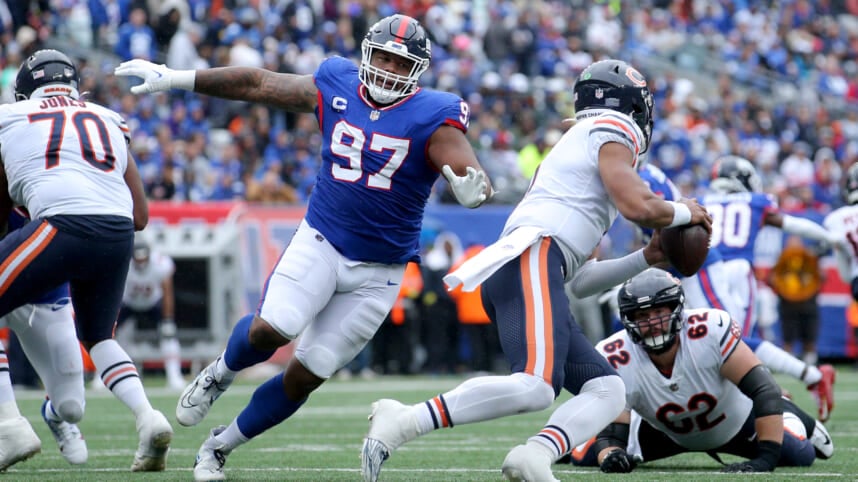 The New York Giants are one of the biggest surprises in the NFL this season as the team has gotten off to a red-hot 6-2 start. The Giants have already surpassed their 2021 win total (4) and are looking like playoff contenders through the first half of the season. Among the many reasons for the team’s success are two standout players in the midst of breakout campaigns. Andrew Thomas and Dexter Lawrence are playing at an All-Pro level through the first eight weeks of the 2022 season, propelling the New York Giants to success.

Dexter Lawrence has played as one of the best interior defensive linemen in the NFL this season. Big Sexy Dexy has earned a 90.1 overall PFF grade so far this year, ranking top-five in the league at his position. The 2019 first-round draft pick has already matched his career-high total in sacks with 4 on the season. Lawrence has stood out as a pass-rusher this year, adding 26 pressures to his 4 sacks.

No player in the NFL has made a bigger leap this year than Lawrence. He was just an average player in 2021 and is now among the most dominant defensive tackles in the league. Not only has he been an awesome run-defender, but he already has five games this season with four or more pressures.

As dominant as Dexter Lawrence has been on the defensive side of the ball, Andrew Thomas has been equally dominant on offense. The 2020 first-round pick is establishing himself as an elite blindside protector. Through 8 weeks, Andrew Thomas has yet to allow a single sack and has allowed only 9 pressures and 8 hurries. But Thomas has not only made an impact in pass protection, he has also been a major catalyst toward the Giants’ successful running game.

One of the biggest reasons for the Giants’ success is their run game. And that’s been mainly due to Andrew Thomas, who has developed into one of the league’s best left tackles. In fact, he is the NFL’s highest-graded offensive tackle after eight weeks.

Andrew Thomas looks like a shoo-in to make an All-Pro team by the season’s end. He is currently dominating all of the competition he has faced and looks like the best offensive tackle in the NFL. The New York Giants offense would look entirely different without Thomas who has emerged as one of the team’s most valuable players.

Dexter Lawrence and Andrew Thomas are on pace to receive some impressive accolades by the season’s end. With those accolades will likely come some hefty paydays. Lawrence and Thomas are proving to be true foundational pieces for the New York Giants to build around as Joe Schoen, Brian Daboll, and company continue to build a contender.