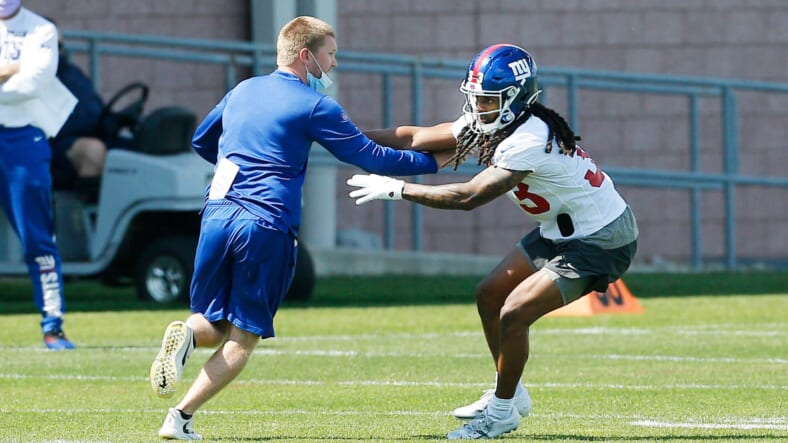 The New York Giants have invested a lot of assets into their secondary over the last few years. They have spent numerous draft picks on guys like Julian Love, Xavier McKinney, Aaron Robinson, Darnay Holmes, and others. They have also made some big signings like James Bradberry, Logan Ryan, and Adoree’ Jackson. One could argue that the Giants have the best trio of starting safeties in the NFL. But they do not just have depth at safety.

Darnay Holmes was an impressive rookie slot cornerback who did not allow a touchdown in coverage during the 2020 season. Holmes was targeted in coverage 52 times and let up a fair amount of completions, but none in the end zone. In fact, he had some impressive pass breakups that prevented touchdowns, like the one below:

CeeDee Lamb burned the @UCLAFootball secondary for 185 yards and two TDs in two career appearances against the Bruins.

Darnay Holmes got his revenge on this end zone PBU early in today’s Cowboys-Giants game (even though DAL ended up winning). pic.twitter.com/CmaMLH1zqD

Darnay Holmes made the switch to slot cornerback in the NFL after playing outside during his collegiate career at UCLA. There were some ups and downs for the rookie, but Holmes flashed enough potential for the Giants to feel confident that they have a starting-level player long-term. Darnay finished the year with 5 passes defended 1 interception, 0.5 sack, and 30 combined tackles.

In 2020, Darnay Holmes fit nicely into Patrick Graham’s zone-coverage defensive scheme. He has good instincts and a quick reaction time. Darnay struggled at times to cover receivers in man coverage across the middle of the field. That is where Aaron Robinson comes in.

Aaron Robinson’s playing style is far different from Darnay Holmes. Darnay fits better in a zone scheme while Aaron fits better in a man-coverage scheme. Patrick Graham has stated in interviews that the Giants are looking to run more press-man in 2021 than they did last season. Aaron Robinson is a physical press-man slot cornerback that will help allow Patrick Graham to make that scheme the focus of his defense.

Robinson’s aggressive playing style also gives him the ability to compete on the outside as well. Arguably ARob’s most impressive trait, though, is his ability to make an impact in run defense. Aaron Robinson posted an 80+ PFF run-defense grade in each of his last two seasons at UCF.

Slot CB — with reps outside of the #’s. Physical presence inside (coverage & run game). Lateral quicks. Best fit could be in a Quarters scheme as a nickel defender — drop/match in coverage, tackle in space, pressure. @NFLMatchup pic.twitter.com/ZbaqolohoX

Regardless of who gets the start in the slot, the Giants have a good problem on their hands. They have two talented players that might be deserving of a starting role. That means that they have a lot of talent at the slot cornerback position and, of course, quality depth.