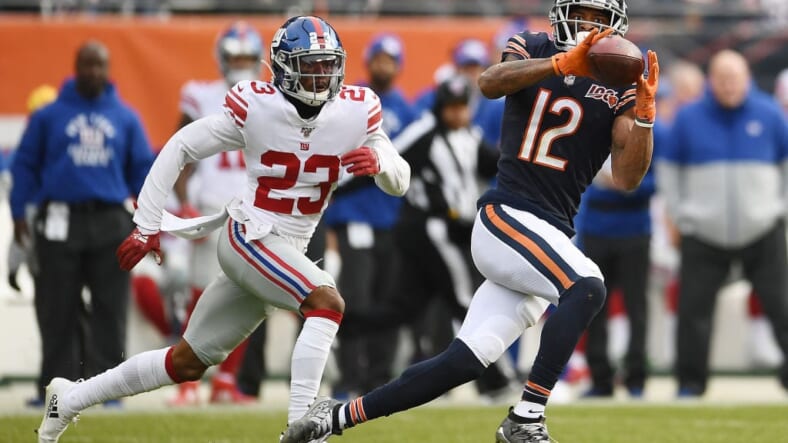 CHICAGO, ILLINOIS - NOVEMBER 24: Allen Robinson #12 of the Chicago Bears catches a pass in front of Sam Beal #23 of the New York Giants during a game at Soldier Field on November 24, 2019 in Chicago, Illinois. The Bears defeated the Giants 19-14. (Photo by Stacy Revere/Getty Images)

On Thursday evening, New York Giants cornerback DeAndre Baker was reportedly involved in an incident at a party, which included a semi-automatic weapon and another NFL player as an accomplice. Baker had previously lost $70,000 in cash a week prior, and set out to a new party to gamble his lost money back into his pocket. After getting into an argument with another partygoer, he proceeded to flip the table and draw a weapon. He proceeded to rob the party of cash and jewelry, at one point he even instructing a friend to shoot someone who just entered the party.

This is Example A of how to throw away your life and potentially successful career in the NFL. If all of these allegations are, in fact, true, Baker will no longer be on the Giants and will likely be sitting in jail. If the accomplice would have pulled the trigger, Baker could be facing the death penalty in Florida. Luckily, nobody was injured during the incident.

Who will benefit the most on the New York Giants after this disaster?

So, as we look forward to the 2020 campaign for the New York Giants, we can already rule one player out indefinitely. New coach Joe Judge will have a big problem to solve, and he already has a few players on the roster that could fill the role Baker is leaving behind.

Former supplemental draft pick Sam Beal is the player that comes to mind and having spent two seasons doused in injuries, Beal has been forgotten. Last year, in his first live-action as an NFL player, he played in just six games and started in three of them. He compiled 26 combine tackles, one pass defended, and a 76.2% completion rate against. On the bright side, he missed zero tackles. However, his completion percentage was dreadful and that is a category he must improve in if he is going to compete for the No. 2 corner spot.

This is undoubtedly a tough situation for newly signed corner James Bradberry, who is expecting to join a team in the flux of success and in the midst of a rebuild. Now, his cornerback mate will likely be sitting in jail as the Giants try to piece together a solution.

General manager Dave Gettleman spent a third-round pick on Sam Beal two years ago, and so far that decision has been a complete mess. That doesnâ€™t mean Beal canâ€™t step up and rise to the occasion. This will be a fantastic opportunity for him to gain significant playing time and show that his 2019 preseason wasnâ€™t a fluke.