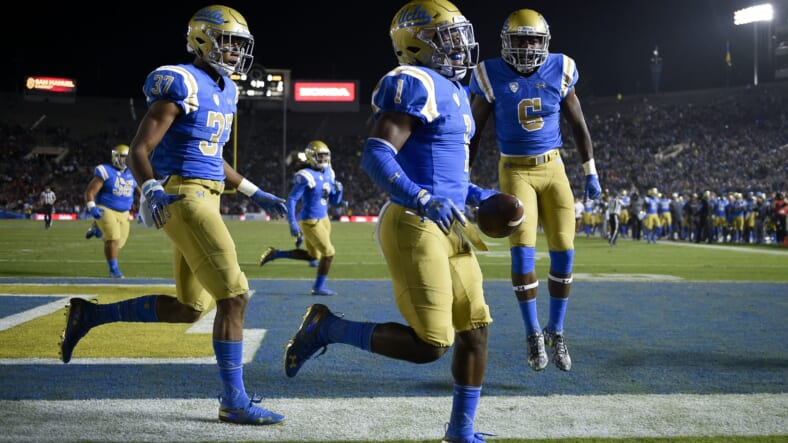 Taking a look at all of the New York Giants’ day three selections:

The Giants got better this offseason, mainly due to the excellent drafting GM Dave Gettleman and HC Joe Judge pieced together. They solved their massive hole at left tackle and secured a versatile safety who can move from the deep portion of the field to the box, where he can rush the passer and play against the run.

Overall, Big Blue knocked this one out of the park, but the later rounds represent untapped potential and upside from young, undeveloped players. Here’s a look at each one and what they bring to the team.

This was an intriguing pick given how many late-round picks Gettleman spent on the secondary last year, but Holmes is one of the fastest corners in this draft class. His incredible agility and place speed made him attractive, and he was also a high-rated nickel corner by most analysts.

Despite not having much experience in the nickel spot, his frame and skill-set match up perfectly. Factor in his return-man abilities and he can start out as a special teams ace and graduate to a starter on defense. He undoubtedly has the traits to get there.

Lemieux could be another gem of an OL in the later rounds, as he can move around the line with a versatile skill-set and frame. As a former four-star recruit for Oregon, he started 52 games at left guard for the Ducks. Referred to as a team leader in college, he’s a strong, quick, and athletic lineman, giving him the potential to be a starter early in his career.

However, the Giants see him as a project and want to develop him to potentially take over for Kevin Zeitler one day or act as a quality depth piece. Nonetheless, he’s a blue-collar player with high upside.

With the 183rd pick in the 2020 NFL draft, the Giants selected Brown out of Penn State. At 6-foot-5 and 233 pounds, Brown has great closing speed and uses his length to his advantage. His frame makes him a high upside player with plenty of potential, and hopefully, the Giants can unlock that.

Patrick Graham has a knack for maximizing linebackers, and Brown is one of those intriguing players that could work his way into the rotation. Despite his solid frame, he gets too aggressive and over rush plays, and his open-field tackling can become problematic at times. A year of development should alleviate some of those concerns, but he is a solid pack in the later rounds.

Carter is a solid prospect out of Minnesota at 6-foot-3 and 236 pounds. His abilities off the edge are a bit limited by his lack of size, but he brings quickness and agility to his game. He played out of position in college and will likely transition to an off-ball linebacker at the pro level.

I project Coughlin as a special teams contributor for the time being, and unless he can put on some serious size, his potential is capped as a rotational player at best.

The Giants drafted South Carolina ILB TJ Brunson with the 238th overall pick. Brunson is a bit undersized and slow for the LB position but has potential as a special teams player. He will inevitably compete for a roster spot as a seventh-round pick, and he does possess decent athleticism and range.

Another slot corner on the books for the Giants, who land CB Chris Williamson out of Minnesota. He’s a tenacious player with solid athleticism and zone coverage skills. Adding more competition to the interior CB spot is a good thing, as it was a real problem in 2019.

Williamson is a poor tackler and lacks anticipation, but his problems are most fundamentally based, indicating he can improve on his issues and hopefully alleviate them.

Crowder is a hard-hitting linebacker who just squeaked into the 2015 class for the Bulldogs. He comes to the Giants with the last pick in the NFL draft at No. 255. As the new Mr. Irrelevant, Crowder will compete for a roster spot with the rest of the 7th rounders.