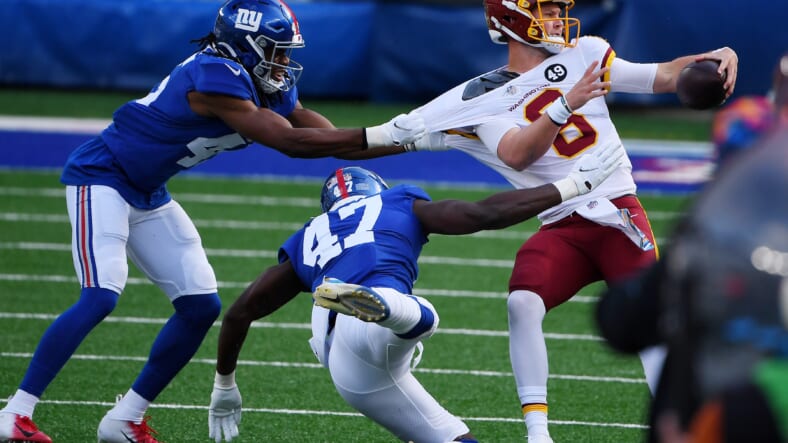 The New York Giants found a way to walk out of week 6 with a victory over the Washington Football Team.

In what ended up being Joe Judgeâ€™s first win as head coach for Big Blue, it was a memorable one. With Washington driving down the field in the final moments and scoring a touchdown, Ron Rivera called for a two-point conversion to give his team the ultimate win. However, the Giantsâ€™ defense stepped up and showed why they are top 10 unit in the league, forcing an incompletion by Kyle Allen and securing the win.

The good news, the Giants, can finally add a win to a category that has been sitting at zero for the first five weeks of the season. Quarterback Daniel Jones ran for 74 yards, leading the team on the ground, but also threw a timely interception that gave Washington a chance at a comeback.

The good news is primarily on defense, as Blake Martinez racked up 14 total tackles, and Tae Crowder recovered a fumble in which he took for a touchdown late in the game.

Game shifting play for the defense, who have kept the Giants alive on a weekly basis.

Cornerback James Bradberry also secured a turnover and continued his dominant performance this year as one of the top CBs in the NFL. In addition, Leonard Williams had a stellar afternoon, recording five tackles, one sack, and a bevy of pressures.

Overall, the Giants won this game because of their defense, as the offense once again struggle to move the ball downfield and pick up first downs. Wide receiver Darius Slayton fought through an injury and finished the day with 41 yards and a touchdown.

Slayton is the TRUTH. pic.twitter.com/1sPEB1s4hW

The bad news, the offense was lackluster, and Daniel Jones was unable to get much going through the air. He finished with just 112 yards passing, and that is likely due to his injured number one receiver in Slayton and the ineffectiveness of Evan Engram.

Ultimately, this was to be expected for the Giants, who still lack talent at the wide receiver position, and the offensive line remains a liability. They transitioned Andrew Thomas to the bench on multiple occasions, including to start the game in favor of Matt Peart. The third-round pick out of Connecticut performed well, especially in the run game, which opened up 61 yards for Devonta freeman.

While the Giants did walk away with a win, it was a scrappy game that couldâ€™ve gone either way. Beating bad teams is a necessity, and the Giants proved they are capable of doing so. This is a big win for Joe Judge and one that can hopefully spark some momentum moving forward.