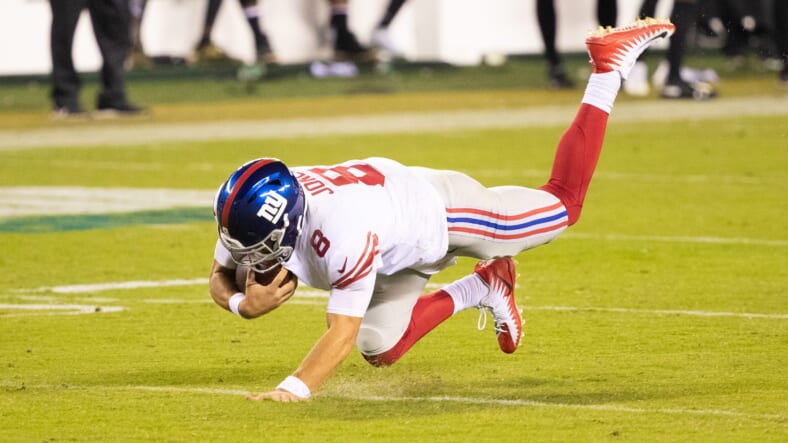 With six minutes left in the fourth quarter, the New York Giants had an 85.1% chance of victory, but of course, the Philadelphia Eagles made that 15% come to life.

After tight end Evan Engram dropped what shouldâ€™ve been an easy reception to end the game, the Eagles marched down the field in the final drive, converting an 18-yard pass to Boston Scott to take the lead with 40 seconds left on the clock. This is just another wound to the chest of Giants fans and management, who simply canâ€™t find a way to extract victories.

In what was a well-coached game by Joe Judge, his team forfeited far too many penalties and gave up 27 first downs to the Eagles. The time of possession was lopsided in the first half but drew near even by the end of the game. However, as most losses go, the Giants lost the turnover battle, with three.

The good news, quarterback Daniel Jones had an encouraging outing, aside from his fumble on the final drive. He threw for 187 yards and two scores, carrying the ball four times for 92 yards.

Overall, I think he looked sharp, despite his offensive tackles producing another lackluster performance. His wide receivers were decent, but Engram once again failed to leave his mark on the game.

Fortunately, the Giants gained back Sterling Shepard just before the start of the contest, as he hauled in six receptions for 59 yards and a score. He was a difference-maker but ultimately wasnâ€™t able to do enough to secure the win for the Giants.

Defensively, there were a few stand-up performances, notably from linebacker Blake Martinez who racked up nine tackles and two quarterback hits. In addition, fill-in linebacker Devante Downs also had a solid game against the run.

Interior defensive lineman Leonard Williams was a force all night long, creating havoc in the trenches and getting after quarterback Carson Wentz. Ultimately, penalties CB2 Ryan Lewis and Madre Harper where the deafening blows in the final moments.

The bad news, the Giants dropped to 1-6, essentially eliminating them from any postseason hope. With two divisional losses, this was a must-win game for Big Blue, and they blew their chance at any recovery. This ensures they will be sellers at the trade deadline on November 3, and they should 100% looking to move Evan Engram, who cost his team the game.

Offensively, the Giants couldnâ€™t get the running game going until the final moments, as Wayne Gallman picked up chunks of yardage in the fourth quarter. However, aside from Daniel Jones, the running backs compiled just 68 total yards on the ground.

Defensively, the Giants have serious issues at CB2 and in their depth. They cannot continue to rely on Ryan Lewis, who was routinely gashed throughout the game.