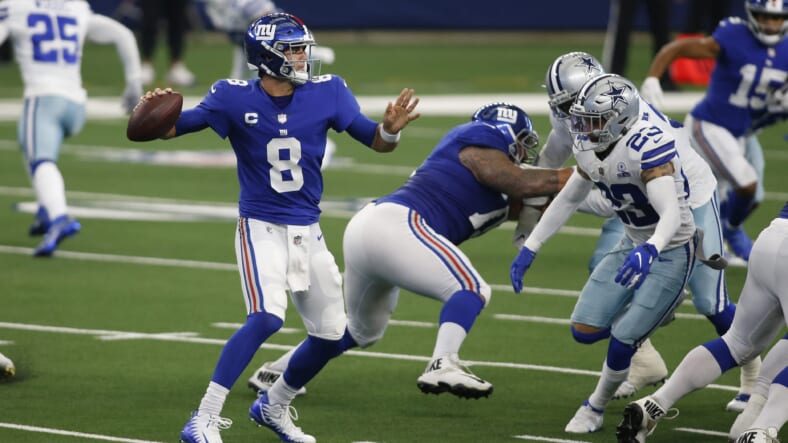 The New York Giants took the Dallas Cowboys to the final moments of the game in week five on Sunday afternoon, but they ultimately werenâ€™t able to walk away with a victory.

Thanks to several late-game missed calls by the referees, the Giants were fighting two teams. Backup quarterback Andy Dalton tossed a 19-yard pass to Michael Gallup on the right boundary, but the referees missed an obvious holding call on the play. The blown call would have put the Cowboys an additional 10 yards back, giving them a 2nd-and-20 chance as they fought for field goal position with 35 seconds left on the clock.

CLOSE UP OF THE MISSED CALL!

Unreal you don't call this 5 feet from your face. Ref even goes for the flag and pulls it back, why? pic.twitter.com/nGBOgkJnyB

However, it wasnâ€™t written in the stars for the Giants, who are now 0-5 on the year.

The good news, the offense finally showed some life, putting up 34 points against the worst defense in the NFL (minus the pick-6=27).

At the very least, the offense was able to get going and show that they can take advantage of good matchups. Quarterback Daniel Jones threw for 222 yards but was unable to get into the end zone. Running back Devonta Freeman scored a touchdown, and Evan Engram also found his way into the end zone on an end-around.

However, it was kicker Graham Gano who carried the team offensively, scoring 14 points and going 4/4 from range. He had a long of 55 and was the first kicker in the Super Bowl era to hit three field goals in the same game of 50+ yards.

Defensively, the only positives came from Kyler Fackrell and Dalvin Tomlinson. Fackrell finish the day with a tackle for a loss, one pass defended, and a pick-6 in the first quarter. Tomlinson had two tackles for loss, one sack, and one quarterback hit. Otherwise, the remainder of the team was problematic and allowed 37 points to the Cowboys.

Fackrell has been phenomenal for the Giants so far this season… If he keeps performing like this I'm open to extending him as part of the rotation. pic.twitter.com/FnxbmiwlYN

There was plenty of bad news from the loss to Dallas. The offense might have put up 27 points, but Daniel Jones failed to throw a touchdown for the third consecutive game. He had his issues, missing a number of throws, but in order to overcome high scoring opponents, they must do the same.

It was an unfortunate game for Jones, who desperately needed a solid performance to quiet the haters. On the final drive of the game for the Giants, he failed to get his team into field goal position and take the lead. While his running game was far better than in recent weeks, with Freeman averaging 3.5 yards per carry, Jones did have several fantastic throws to Darius Slayton on the sideline, including a one-handed snag on a perfectly placed ball. It is fair to mention that the referees gave Dallas multiple calls, including an offensive pass interference that wouldâ€™ve secured a good cushion late in the game.

Overall, the Giants once again put up a solid effort, but moral victories are unacceptable at this point in the season. Something needs to change, and the lack of talent has been obvious on both sides of the ball. While the defense has been more consistent, allowing 37 points to a team that lost Dak Prescott is borderline embarrassing.

My primary concerns are as follows — lack of discipline, still major issues at CB2, and in the slot against better WRs, bad pass protection at times, Daniel Jones’ decision making, and Jason Garrett’s scheme completely falling flat after the first half.