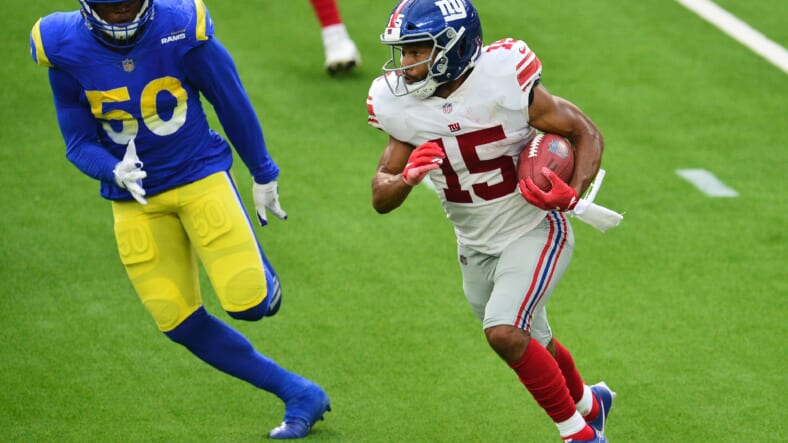 The New York Giants have some tough decisions to make with the 2020 NFL Trade Deadline quickly approaching. The deadline is on November 3 and the Giants have already started to move players for draft capital. Edge rusher Markus Golden was traded to the Arizona Cardinals for a 2021 sixth-round draft pick earlier this week.

But the Giants have had trade talks about multiple players with multiple teams. Sources have confirmed that teams have called about tight end Evan Engram. Ian Rapoport also confirmed reports stating that offensive guard Kevin Zeitler and wide receiver Golden Tate are available for trade.

These two veterans might be crucial to the offense’s success, but they are both the most valuable trade assets that the Giants can afford to part ways with. For veteran wide receiver Golden Tate, the Giants might not have been able to get much a few weeks ago, but his improved play and the multitude of injuries around the league may have increased his trade value.

While Golden Tate has not been heavily involved in the Giants’ offensive game plan, he was still able to put together a highlight-reel catch in Week Seven. Tate was targeted only twice on Thursday Night but he had one spectacular reception for a 39-yard touchdown.

Golden Tate has always proven to be a reliable, veteran receiving option for the Giants. But fans have recently started to question how much Tate has left in the gas tank. After seeing him make an incredible catch like that, there is reason to believe Golden Tate could still contribute meaningful games for an NFL offense. A team in the NFL in need of one more receiving weapon down the playoff stretch might value Tate’s services.

Injuries across the league

Another factor that could inflate Tate’s value is the number of injuries across the NFL. The 2020 NFL season has seen a huge number of star players suffer season-ending or season-lingering injuries. As Matt Lombardo of GMEN HQ pointed out, the Cleveland Browns recently lost superstar wide receiver, Odell Beckham Jr., to a season-ending injury. This could make Cleveland a potential landing spot for Golden Tate as they sit firmly in the playoff hunt.

The New Orleans Saints have been without Michael Thomas for some time and have recently lost Emmanuel Sanders for a couple of weeks as he tested positive for COVID-19. A Drew Brees to Golden Tate connection could be possible.

As the New York Giants sit at the bottom of the lowly NFC East with a putrid 1-6 record, a fire sale could be coming with the trade deadline approaching. Tate does not appear to be a long-term option for New York. It might be time for them to cut their losses and recoup a draft pick in exchange for Golden Tate.