New York Giants: GM Dave Gettleman has a Plan, but What is it? 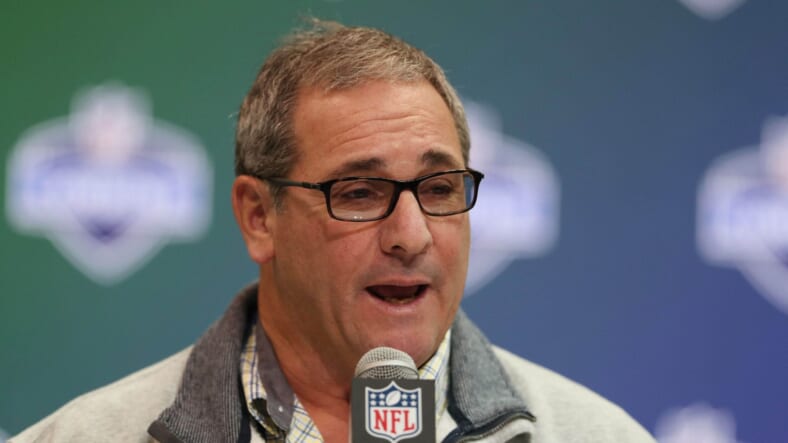 The trading of Odell Beckham Jr. immediately convinced most fans that New York Giants general manager Dave Gettleman, in fact, doesn’t have a plan. On the contrary, the second-year GM for Big Blue has a pretty good idea of what the team needs to succeed, and it starts with a culture change.

Getting rid of antics related players like Eli Apple has proven to be a solid strategy for the Giants, as most current members are impressed by the leadership in the locker room and the atmosphere around the team. Sensational running back Saquon Barkley is leading the pack in terms of intangible attributes – leading by example and through words.

What is Dave Gettleman’s plan for the New York Giants?

Success is only built through the people that believe in the ideology set forth before them. Structuring the team around players that are dedicated to the task at hand is essential – when they’re your best players it makes the mantra even more believable. Gettleman has utilized his resources to build the floorboards of the team through Barkley, Sterling Shepard, Eli Manning, and other natural born pilots.

While sending Landon Collins and Beckham on their way wasn’t the most well-received move, it made sense in the grand scheme of things. Both Collins and Beckham have been involved in their fair share of antics and portrayed the image of the team in a negative light (at times). Their abilities counteracted that reality, but the team can succeed without them. Trading Beckham will only prove to be efficient if they grab a Pro Bowl-caliber player with the 17th overall pick.

The Giants are rebuilding the right way:

Holding two first round picks in the 2019 NFL Draft allows the Giants to fix two major holes on the team – whether it be at the quarterback position or on the defensive line, having two premium level picks to spend is significant.

How do you think the Cleveland Browns rebuilt their team so quickly? Draft picks. The Giants are taking a similar approach towards their own rebuild, and yes, it’s considered a rebuild. Why? Because nearly every position has been overhauled in the past year and a half. If you believe that a rebuild is centered around the quarterback only, you might find yourself looking at one next Thursday when the Giants potentially use the 6th overall pick on a passer.

The bottom line, Gettleman has prioritized building the locker room out with talented leaders that can face adversity. There will undoubtedly be challenges and obstacles to handle in 2019 with a lack of defensive weapons. That’s the first step in rebuilding a team. The second is ensuring you have a capable quarterback, the third is having talent in impact positions (defensive end, running back, linebackers, tackles). Fourth is adequate starters at corner, safety, offensive line…Fifth is depth.

The Giants are far from having a well-rounded team, but the draft should give us a better idea of which positions need additional cap allocations – 2020 will offer over $80 million in space to sign premium talent.