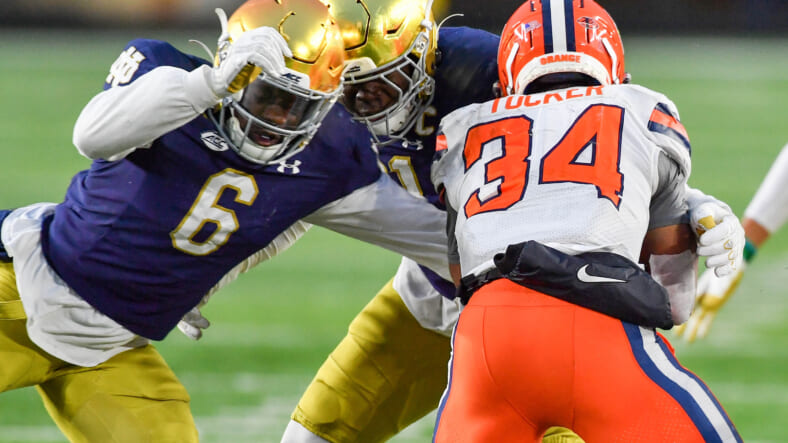 Drafting Notre Dame’s Jeremiah Owusu-Koramoah would take the New York Giants defense from being a very good defense to being an elite defense.

I know what you are probably saying to yourself, “Why are we already talking about who the New York Giants should draft in the 2021 NFL Draft when there are four weeks remaining in the season, and the team is in first place in their division?”. I totally understand the confusion. In recent years, writers were forced to look ahead to NFL Draft prospects for the Giants by this time of year because the season was already over for Big Blue, and there was nothing else to look forward to.

Obviously, this year is different. If the season were to end today, the New York Giants would qualify for the playoffs, despite currently having a losing record of 5-8. The Giants are coming off a four-game win streak that has propelled them to the top of a weak NFC East. Despite their record, the team has looked exponentially better this season and looks like they could represent a difficult matchup should their current trajectory hold up and they make the playoffs.

Much of their success has been a direct result of a massive improvement on the defensive side of the ball. New defensive coordinator, Patrick Graham, has the Giants’ defense playing at a level that we have not seen in recent years. Currently, New York is ranked eighth overall in the NFL after stifling a very potent Seattle Seahawks offense that came into last week as the third-highest scoring offense in the league.

The Giants will need to address the expiring contracts of Leonard Williams, Dalvin Tomlinson, and Logan Ryan, who have all played a major part in the success of this defense. According to spotrac.com, they currently are slated to have just over $18 million in remaining cap space heading into 2021, which doesn’t bode well for keeping the trio. However, moving on from Nate Solder, Kevin Zeitler, and Golden Tate would free up another $21.5 million in cap space, which may allow them to keep all three.

However, if this scenario does play out and the Giants are able to keep all three free agent defenders, they will have limited cap space remaining and will unlikely to be able to sign any additional big named free agent players. That means that the defense will have to add any additional significant improvements to the defensive unit via the NFL Draft.

While a case could be made to draft a big-play wide receiver for Daniel Jones or another young piece along the offensive line in the first round of the 2021 NFL Draft, a case could be made to take an impact defensive player who can take an already excellent defense to elite status for years to come. After all, we all know that great defenses win championships.

If the Giants continue to have success to close out the 2020 season and do, in fact, make the playoffs, elite defensive talents such as Penn State linebacker Micah Parsons, edge rushers Gregory Rousseau of Miami and Carlos Basham of Wake Forest, and TCU safety Ar’Darius Washington will likely be gone when New York makes their pick. However, the best fit for the GMEN on defense will likely still be on the board when they step up to the podium. That player is Notre Dame outside linebacker Jeremiah Owusu-Koramoah.

The 6’1″ and 215-pound Owusu-Koramoah, or “JOK” or “Wu,” as Irish fans affectionately know him as is a bit undersized at the linebacker position. However, Owusu-Koramoah makes up for his lack of size with incredible athletic ability. JOK has thrived as the leader of a stout Notre Dame defense the past two seasons. He has been exceptional as the rover linebacker for the Irish, recording 127 total tackles, 10 sacks, five forced fumbles, one interception, seven pass deflections, and a fumble return for a touchdown over that span.

Anyone who watches Notre Dame football is likely to notice #6 flying all over the field, seemingly making big plays at will. While Owusu-Koramoah wasn’t a big-time prospect coming out of college, rating only as a 3-star recruit out of Hampton, Virginia, his ability to make plays has catapulted him to become one of the elite defensive players in college football.

Owusu-Koramoah appears to be the perfect fit for the New York Giants in the upcoming draft. One of the few weaknesses remaining on the Giants defense is at outside linebacker. While the GMEN have arguably one of the best middle linebackers in the game in Blake Martinez, they are lacking production at the outside linebacker position. Some of this is due to losing both Oshane Ximines and Lorenzo Carter to season-ending injuries. Both Carter and Ximines have shown flashes of becoming solid pass-rushing options at the outside linebacker position, but neither is a sure thing, especially coming off of major injuries.

Adding a playmaker of Jeremiah Owusu-Koramoah’s caliber to play alongside Martinez would represent a major improvement on an already impressive Giants defense. “Wu” would give Patrick Graham’s defense a player who is excellent as a pass rusher, who can provide solid coverage in the passing game, and who has a propensity to come up with huge plays at critical times. If either or both of the tandem of Carter and Ximines return and reach their potential, the linebacking group of Martinez, Owusu-Koramoah, Ximines, Carter, and the young late-round picks from last year’s draft give the Giants a very young, talented, and deep linebacking corps to go along with their young, talented, and deep defensive line and secondary.

If the New York Giants are able to secure this best-case scenario and resign the trio of Williams, Ryan, and Tomlinson and then are able to add a player of Owusu-Koramoah’s ability in the draft, this defense looks poised to be among the best in the National Football League for years to come. Having a strong defense takes a lot of pressure off of Daniel Jones and the offense. If they can pull off these moves in the offseason AND add a few offensive weapons for Jones, this team will be a legitimate Super Bowl contender.