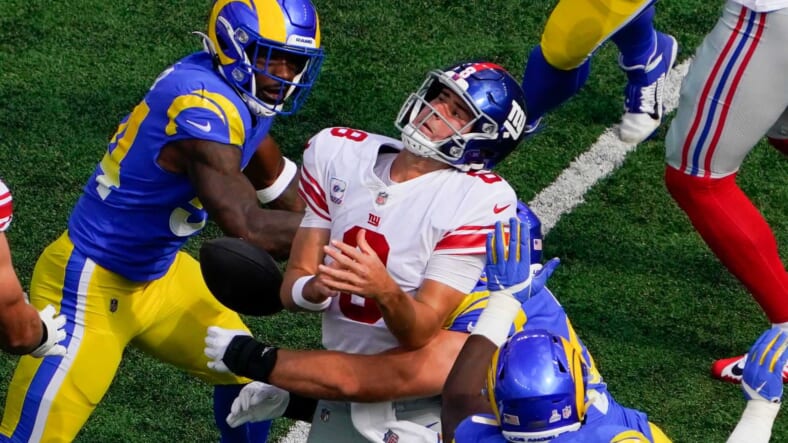 The New York Giants have fallen to 1-5 after losing their second consecutive game. The Giants hosted the Los Angeles Rams in MetLife stadium today and were blown out, losing 38-11 in embarrassing fashion.

It was a day riddled with injuries, turnovers, and missed opportunities for the Giants. Daniel Jones started the game after suffering a concussion only seven days ago. The Giants’ quarterback committed four turnovers (three interceptions and one fumble) in what was by far his worst performance of the season thus far.

The Giants came into this game short-handed. Saquon Barkley, Kenny Golladay, and Darius Slayton were all inactive. Somehow, the Giants left the game with even fewer key players on offense. Kadarius Toney, Andrew Thomas, and CJ Board all left the game with injuries.

Matthew Stafford and the Rams’ offense lit up the Giants’ defense. Stafford threw for 251 yards and 4 touchdowns. The Rams totaled 365 total yards of offense compared to the Giants’ 261 yards.

The injury-riddled New York Giants are in a difficult situation. The fanbase is fed up and wants to see major changes made soon. For now, the Giants will prepare to play the Carolina Panthers next week. At 1-6, the Giants are in dire need of a win to get the fanbase back on board.