New York Giants get blown out on prime time, lose 30-10 to Buccaneers 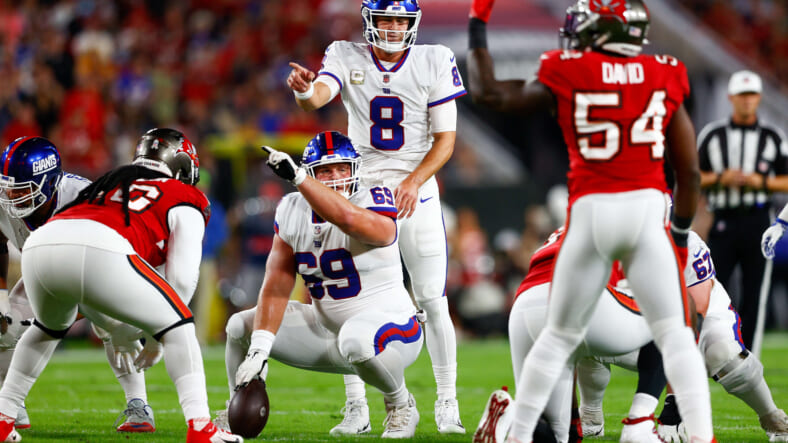 The New York Giants have fallen to 3-7 after a blowout loss to the Tampa Bay Buccaneers on Monday night. The Giants went into this game with high hopes coming off of a bye week. New York won their last contest two weeks ago, got healthy over their bye, and still delivered a pitiful performance on Monday.

The Giants do not seem like a team that has a realistic chance of making the playoffs anymore. Their offense was inept versus the Buccaneers and their defense gave up 402 yards of offense. Tom Brady and the Bucs made easy work of the Giants to improve their record to 7-3 on the season.

The New York Giants put up only 10 points on the road against the Tampa Bay Buccaneers who were averaging over 40 points per game at home entering this contest. The Bucs put up 30 points, demolished time of possession, and won the turnover battle (3-1). Daniel Jones struggled to keep the ball clean and see the field, throwing 2 interceptions and gaining only 167 yards through the air.

The predictable Giants offense received plenty of criticism throughout the night from the ManningCast, the ESPN MNF cast, and fans around the world. Jason Garrett’s offense struggled to establish an identity against a bruised and battered Buccaneers defense.

Tampa Bay went out and put up points as they tend to do. Tom Brady looked as cool and collected as he usually does, completing 65% of his passes for over 300 yards. Brady led the Buccaneers to long, methodical scoring drives with no hiccups.

For the New York Giants, this is a demoralizing loss in what has been a hugely disappointing 2021 season. The writing seems to be on the wall: major changes are on the horizon. The Giants cannot continue their losing ways and will need ownership to step in and turn things around sooner than later.