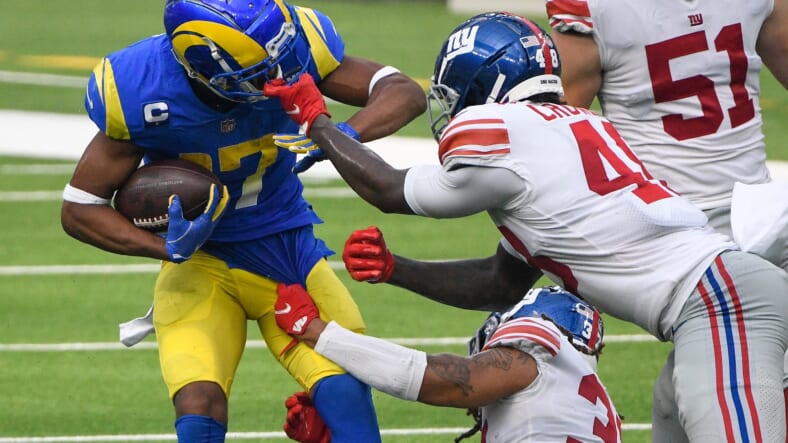 Despite having the 5th best defense in points allowed and 13th best defense in yards per game allowed, the New York Giants arenâ€™t stopping there. They want to see improvement on a weekly basis and recognize their positive momentum with gradual growth.

While the offense hasnâ€™t followed a similar model, defensive coordinator Patrick Graham has done a fantastic job piecing together a unit that was expected to be a weakness during the 2020 season. The Giants, who have started the year 0â€“4, have been stellar stopping opposing teams from getting in the end zone.

With the offense unable to increase their time of possession and hold onto the football, the defense has done more of the heavy lifting. They have risen to the occasion, but Graham is preparing to make another tweak that could help the defense even further in the near future.

The New York Giants are preparing for a change:

Big Blue started the 2020 season with Devante Downs as their starting middle linebacker alongside Blake Martinez. Martinez has greatly masked the deficiencies of Downs, playing fantastic football and flying around the field.

Through four games, Martinez has 43 combined tackles, five tackles for loss, and 2.0 sacks. He has been phenomenal, but his partner in crime, Downs, has been virtually nonexistent. In the same timeframe, he has earned just nine combined tackles and zero tackles for loss. He is a significant liability in coverage as well, allowing an 83.3% completion rate. Heâ€™s also missed 10% of his tackles but hasnâ€™t been in position to post a larger sample size.

Altogether, his positioning, inability to cover, and lack of football IQ has simply forced him out of the starting lineup.

Incomes â€œMr. Irrelevant,â€ Tae Crowder, who looked fantastic in coverage against the Los Angeles Rams in week four. It seems as if the Giants are playing situational football, and their biggest weakness close to the line of scrimmage is at MLB2 on the weak-side, where they have a coverage liability. With David Mayo working his way back, this is Crowderâ€™s best chance to cement himself as a starter on defense.

“We’re trying to get him on the field,” Giants inside linebackers coachÂ Kevin SherrerÂ earlier this week. “We think he’s got the ability to help us in some roles, so we put that role on him and he did a really good job with it. It was only two plays, would have liked to have possibly been more, but sometimes you can’t predict what situations are going to come up, so you take them as they unfold. But hopefully his role will increase as the season goes if he continues to develop like he has.”

Over his final two years at the University of Georgia, Crowder played in all 28 games, logging 115 total tackles, 10 tackles for loss, 1.5 sacks, two interceptions, five pass breakups, and two fumble recoveries. He managed to sustain his starting position with Georgia, and the Giants might have gotten a steal with the last pick in the 2020 NFL draft.

While he will certainly have rookie hiccups, I would like to see more of Crowder on game day, especially with the team struggling and in need of an upgrade at the position.