New York Giants: Former Broncos Linebacker Could Be An Option In Free Agency 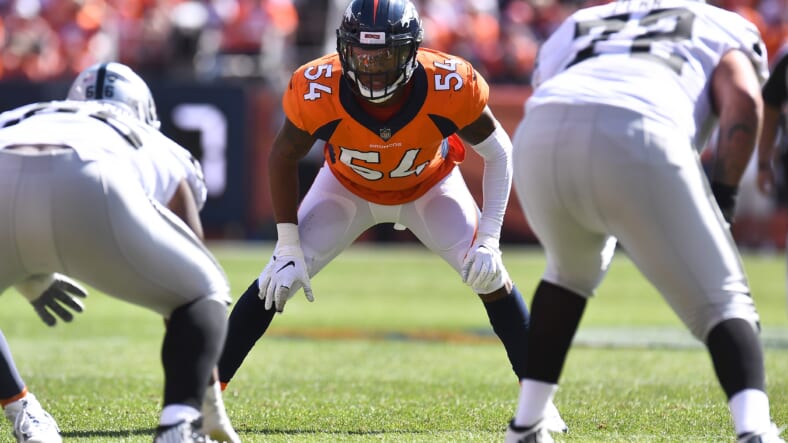 It is no secret that the Giants had one of the NFL’s absolute worst defenses in 2018. General manager Dave Gettleman has said publicly that fixing the defense is a priority for him in the 2019 offseason.

One position group that the Giants could improve at is linebacker. Luckily for them, there are plenty of quality linebackers in this year’s free agency class. On Friday, another veteran linebacker was added to the mix.

In an effort to free up cap space, the Denver Broncos declined the option of one of their defensive starters. This player is linebacker Brandon Marshall. Marshall is 29 years old and has played for the Broncos since 2013. But now, in the 2019 offseason, Brandon Marshall will become a free agent.

Marshall had a down year and 2018 and was not able to stay on the field. He played in only 11 games due to injury, but only started in 7 of them. He still managed to total 42 tackles. Despite missing 5 games in 2018, Marshall does not have an extended history with injuries.

In 2017, Brandon Marshall played and started in all 16 games. Brandon racked up 106 total tackles, 3 sacks, 6 tackles for loss, and four passes defended. On top of that, Marshall forced a fumble, and recovered one for a touchdown.

Brandon Marshall was in impact player in 2017. If he can return to form in 2019, he could wind up being a steal in free agency for whichever team signs him.

Last offseason, the Giants traded for linebacker Alec Ogletree. Alec was a captain for the Giants in 2018, but he was far from being a top linebacker in the NFL.Â Â Alec OgletreeÂ finished the season with aÂ 50.7 overall grade, ranked 81st out of all linebackers in the league. He was inconsistent in coverage and missed many tackles that left fans frustrated with the defensive captain.Â B.J. GoodsonÂ performed better (66.2 overall PFF grade), but was still only the 41st ranked linebacker in the NFL.

The Giants need help on defense, and adding another solid veteran linebacker would be a huge addition to the 5-11 team. Brandon Marshall should be available on a cheap contract due to his age and injury during 2018. However, that low price point is why he might be a fit for the Giants. Marshall could come in and be a solid starter for the Giants in 2019. If he is able to exceed expectations and return to his prime form, the Giants could come away with the steal of free agency.