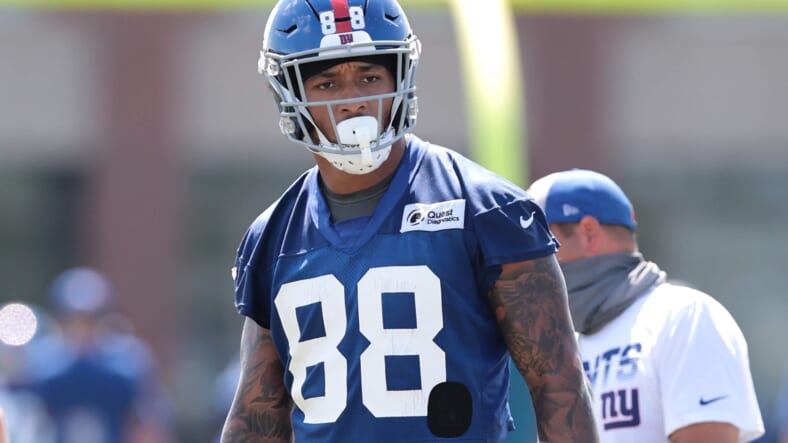 Catches have been a big problem for New York Giants tight end Evan Engram. A missed catch blew the game against Philadelphia when the Giants should have had a game ending first down, but even beyond that, the problem of drops has remained throughout Engram’s career. In fact, it’s been called his biggest flaw other than his inability to stay healthy. This season, with a healthy Engram, his drops have some to the forefront more than his injury problems.

Engram managed to score his first touchdown since October of 2019 in the Giants’ win over Washington, but that game wasn’t without another signature drop from him. But he did have something to say about it after the fact, intending to continue working on it.

“Just really was a routine play and I got a little too excited and the ball went through my hands. I just have to keep working and stay at it all week and stay and catch balls and working on technique â€“ keep eyes on the ball all the way to the tuck,” Engram said. “It was just a play that I wish I could get back and grab it and make play. Those things happen. You just have to overcome it.”

The Giants were urged by many to move on from Engram after the Philadelphia game, but the front office has stood by the tight end for now and the Giants turned down multiple trade offers before the deadline. That’s similar to last season, where the Giants also considered Engram an untouchable talent. But what does Engram himself think of the frequent trade talks?

“I donâ€™t really pay that much attention to it. I just control whatâ€™s on my plate and whatâ€™s in front of me and whatever happens is whatever happens. Like I said, Iâ€™m blessed to be here as a Giant and it was a hell of a game that we played today and Iâ€™m just glad we got the win.”

Engram had 48 yards and caught half of the 10 targeted passes thrown his way. It’s hard to see him moving on from the Giants in the foreseeable future after they declined to trade him, but a high level of performance will certainly be expected going forward as the team has invested a lot of faith in Engram for the future.