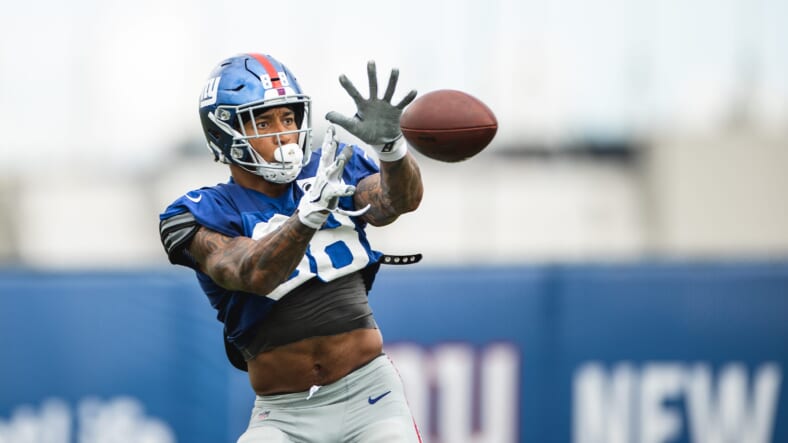 For much of the offseason, a fear was that the New York Giants could end up missing running back Saquon Barkley in their season opener. However, now that we’re only days away from that opener, it looks like a different player is likely to miss the week one matchup with Denver. That player is Evan Engram, who may once again have to sit out with an injury and this time miss the first game of the season.

It’s looking more and more like Engram will miss the game, and the latest evidence is his absence from practice on Thursday. On the Giants’ injury report for the day, a number of players were listed as limited – but Engram was notable for not participating entirely, and was the only player on that part of the list.

There is good news, however. While the Giants may not have Engram for the game, it looks at this point like they will have Saquon Barkley on the field. That’s been the feeling for the past week, but Giants offensive coordinator Jason Garrett made some statements on Thursday that might support the idea of Barkley getting back for week 1.

Garrett on Barkley getting back to 100 percent

“Yeah, a lot of confidence in him as a player and I think he’s done a great job to get himself back healthy and 100 percent,” Garrett said when asked by reporters whether Barkley was the same player he’d seen before.

With Barkley looking 100 percent in the eyes of the team’s offensive coordinator, it doesn’t seem like there’s much holding the player back at this point.

Losing Engram will be a blow to the offensive depth of the Giants for Sunday’s game, but the offense should still look like an improvement from what we saw in the preseason if Barkley and the team’s new additions at wide receiver play.

The offensive line will remain a point of contention for the foreseeable future and for good reason, but the Giants are far from uncompetitive with their first opponent of the season. Given the way the injury news is looking recently, the Giants should be able to put more weapons on the field than they’ve featured on any previous roster in years.