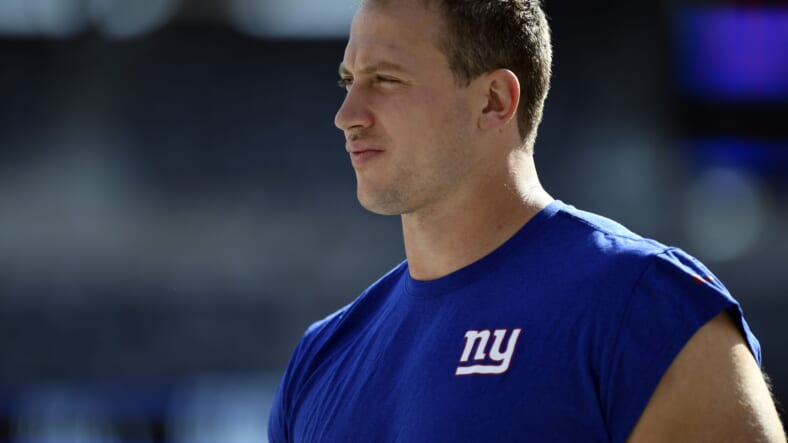 Not every player that’s with the New York Giants now will make it to the regular season. This offseason is set to be especially competitive, after the Giants made a number of new additions on both offense and defense. With only so many roster spots available, it’s just simple math that some of the existing players will be displaced. What’s up for debate, however, is which players that will be. According to ESPN, former starting tackle Nate Solder could easily be one of the cuts.

Why he could get cut: Solder opted out last year and didn’t play particularly well the two years prior. And now it has been 18 months since the veteran offensive tackle has been in a full-contact practice or game. Who is to say his body can hold up at 33 years old after more than a year off? Or that he’s willing to go through the full grind to potentially be a backup for the first time since he was a freshman at Colorado? Only time will tell. Solder is competing this summer not only for the starting right tackle job with Matt Peart, but also a roster spot. — Jordan Raanan

ESPN’s Jordan Raanan named Solder as the veteran player in danger of a cut, despite the Giants coming to terms with Solder on a smaller contract for this season. But how much merit really is there in that prediction?

Solder hasn’t impressed anyone during his time on the field with the Giants. That, primarily, is the reason why he jumps out as a candidate for a cut. When Solder’s contract was reworked, some would have preferred for the Giants to just move on from the player altogether. The fact that Solder hasn’t played for a year is only another red flag on top of his previous performance.

This all means that training camp in specific will be a big deal for Solder. It’s when we’ll get to see him moving at full speed and whether or not his play has dropped further after taking time off. Multiple interviews with Solder earlier in the offseason indicate that he’s at peace with the idea of retirement.

Given that, and the fact that Solder expressed enjoyment at the time he spent away from the game, we shouldn’t consider it too surprising if Solder is more willing to accept a cut and retire instead of pushing himself to turn back the clock. He’s already accomplished more than most players in the league, after all.

And for the Giants, such a move might not be the worst option in the world. They already know who would replace Solder if he wasn’t on the roster this season, and with the ongoing competitions at some spots, the Giants could really use an extra roster spot.