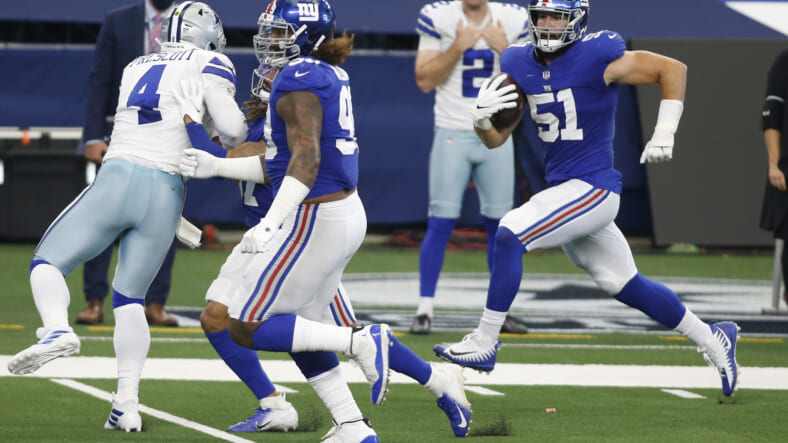 The New York Giants made a list of roster moves today ahead of their final regular-season game of the 2020-2021 season. The Giants will host the Cowboys in a crucial Week 17 matchup with major playoff implications. If New York loses, they will be eliminated from playoff contention. If the Giants win, though, they will need a little help from Philadelphia, but will still have a shot at the playoffs.

The Dallas Cowboys offense has been electric over the last three weeks. Andy Dalton and Dallas are averaging 36 points per game during this active winning streak. The Giants will need to slow down the Dallas offense in order to win this game. Fortunately, New York is getting a little extra help back this week.

The New York Giants announced today that they have activated edge rusher, Kyler Fackrell, off of injured reserve. Fackrell had been out since Week 13, recovering from a calf injury. He missed the Giants’ last four games but is healthy just in time for the hopeful playoff push.

The Giants signed Kyler Fackrell to a one-year deal this past offseason. He played in each of the Giants’ first eleven games this season, starting eight games this season. Through those eleven games, Fackrell managed to total three sacks, 31 combined tackles, one interception, and one forced fumble.

Arguably Kyler Fackrell’s best game of the season, ironically, came against the Dallas Cowboys in Week 5. Now, Kyler is ready to return to the lineup ahead of the Giants’ final game this season against no other than the Dallas Cowboys.

In that Week 5 matchup, the Giants scored a season-high 34 points. One of the Giants’ touchdowns in this game came from the defensive side of the ball. Near the end of the first quarter, Kyler Fackrell picked off quarterback Dak Prescott and returned the interception all the way home for a 46-yard touchdown. Fackrell looked like a running back, making multiple men miss en route to the end zone.

Fackrell also totaled three combined tackles and one tackle for loss in that game while playing 98% of the Giants’ defensive snaps. Getting Kyler back will be crucial for the Giants. New York has been ravaged with injuries this season on the edge and can use all the help they can get generating a pass-rush. As he works back from injury, do not expect to see a ton of Kyler Fackrell on the field on Sunday, but expect to see him rushing off the edge in clear passing situations.