New York Giants: Drafting DeAndre Baker was a much more controversial deal than we realized 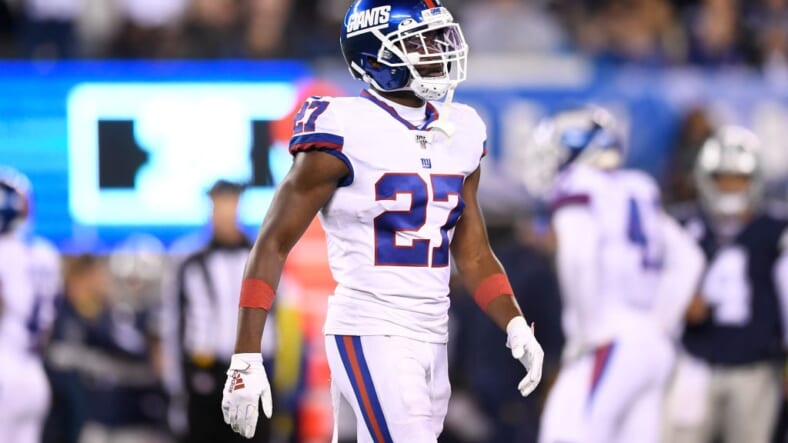 EAST RUTHERFORD, NEW JERSEY - NOVEMBER 04: Deandre Baker #27 of the New York Giants looks on during second half of the game against the Dallas Cowboys at MetLife Stadium on November 04, 2019 in East Rutherford, New Jersey. (Photo by Sarah Stier/Getty Images)

When trying to exercise the entire rebuild of a football roster, it’s often a good idea to look in-depth into the type of people being allowed entry into the building. The New York Giants threw around the word “culture” far too often to have a first-round draft pick from 2019 facing jail time after being accused of an armed robbery. Cornerback DeAndre Baker has been the man of the hour with his most recent blunder, from sleeping in meetings to robbing people at gun-point. That’s quite the jump if you ask me.

However, his personality issues and arrogance isn’t a new occurrence. It’s something the Giants have been dealing with for quite some time. In fact, before he was drafted, there was controversy over the selection, but the Giants traded up and grabbed him anyway.

â€œThere was a battle in our building on whether we were going to take DeAndre or not,â€ the New York Post discovered via a source,â€œ because the story was he had to have his aâ€“ kicked every day to work hard at Georgia â€” to even go to practice. We knew that and we still drafted him, and from Day 1 it was like taking a guy in the first round that you had to teach nearly everything to.â€

It seems the Giants knew what they were getting in Baker — a lazy, arrogant, piece of work. Clearly, he’s lived up to those expectations as he’s now facing time in prison and the loss of his entire career.

Was this Dave Gettleman’s fault?

Nobody but Baker should be blamed for his actions, and reports have indicated he’s still at large amid an arrest warrant. Gettleman, however, was aware of these troubling red-flags that he was clearly warned about. Missing on a player in the first round can be pernicious to a team, but luckily, he had three of them last year, and Baker was the worst of the crop in his rookie campaign.

That doesn’t mean he was void of potential, as it was likely he would’ve developed into a quality corner for the New York Giants. Now, they’re looking at replacements to sure up a position that has been a significant weakness in recent years. Nonetheless, we can continue to adopt the “next man up” mentality and push forward.

In the meantime, Baker has some explaining to do.